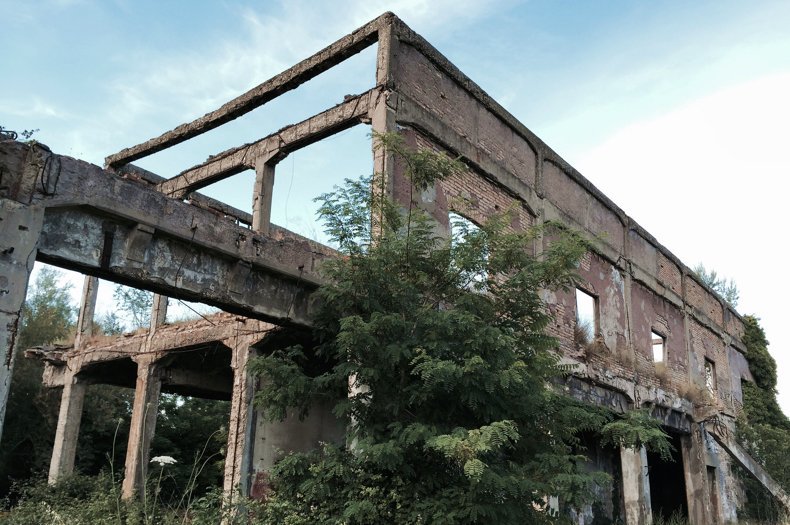 An Anthropocene wildness grows in Rome
Even in dense urban areas, natural abundance may yet flourish again, sustained by both neglect and stewardship. It’s a small parable of nature in the Anthropocene, playing out near an abandoned factory in the heart of Rome.
By Brandon Keim
May 31, 2017

Even in one of the most densely urbanized places on Earth, wildness and natural abundance may yet flourish again, sustained by both neglect and stewardship. It’s a small parable of nature in the Anthropocene, playing out near an abandoned factory in the heart of Rome.

Nearly a century ago, the factory—belonging to SNIA Viscosa, a manufacturer of artificial silk—was built along the spring-fed Marranella stream in what was then the city’s outskirts. The stream was channeled and covered, its waters harnessed to feed the factory. At its height, the factory employed 2,500 people, many of whom lived on its sprawling grounds. In 1954 the factory closed. Over the next several decades, as Rome’s metropolis engulfed the site, part of it would be turned into a public garden. The rest was abandoned, and in the 1990s a property developer purchased the old buildings and embarked on an illegal mall construction scheme.

It was soon halted, but not before the developer excavated a car park. The pit soon filled with water, forming an accidental lake that, with the area fenced off and allowed by default to regenerate without human interference, became the inadvertent centerpiece of what’s now a teeming patch of urban wildness.

That “degraded industrial area,” write researchers led by ecologist Corrado Battisti of the Torre Flavia Long Term Ecological Research Station, is now “a site worthy of conservation,” emblematic of how human activities can produce unexpected ecologies and how urban nature—so often conceived in terms of intentional planning and design—must also embrace happenstance. In a study published in the journal Environmental Development, the researchers describe their survey of the site’s vegetation and bird communities: some 352 spontaneously-occurring plant species, a number that’s “striking for a heavily urbanized area,” and 62 species of birds, including several that are threatened.

The menagerie is spread out among eleven distinctive habitats, including several—such as exposed-rock grasslands, steppe prairie, an evergreen forest suspended in an early-successional stage—that are officially considered habitats of conservation concern in Europe. That they’re jumbled in such close proximity is an ecologically novel situation, and altogether they should be considered a vital part of Rome’s “patchy archipelago” of parks and remnant natural fragments.

As befits that haphazard ecology, the management of the SNIA Viscosa site is also a patchwork. Some of it is publicly-owned and managed by a local citizen group who’ve enlisted the help of ecologists. They’ve called for the entire area to be designated a Natural Monument, which would ensure its long-term protection. This is vital, says study co-author Giuseppe Dodaro of Rome’s Sustainable Development Foundation, because other parts, including the lake’s surroundings, are still privately-owned. They’re a juicy target for developers, and indeed local citizens have fought off several proposed building projects.

Having flourished with neglect, this new ecosystem now depends on the stewardship of people who’ve come to love and enjoy it. “When the guys who manage it organize events, many people always participate,” says Dodaro. “It will not be easy to tear it out of the neighborhood.”