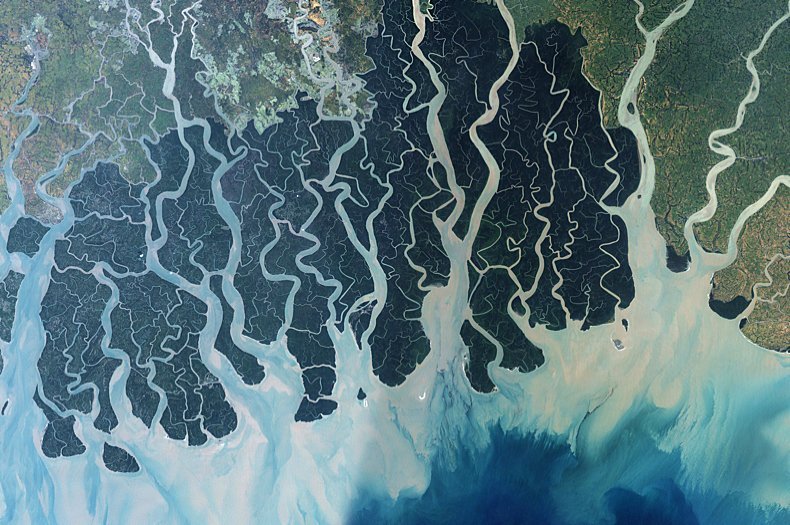 Mangroves optimized: How to make coastal habitats sequester even more carbon
Reducing pollution, protecting predators, and restoring natural hydrologies offer a tremendous opportunity for carbon storage beyond the basic strategies of protection and restoration.
By Brandon Keim
May 3, 2017

Of all the carbon buried in the floors of Earth’s oceans, most of it is found in the narrow strip of tidal marshes, seagrass beds, and mangroves along their edge. Known as blue carbon ecosystems, these vegetated coastal habitats “occupy only 0.2% of the ocean surface, yet contribute 50% of the total amount of carbon buried in marine sediments,” write researchers, led by Deakin University ecologist Peter Macreadie, in the journal Frontiers in Ecology in the Environment. Meter for meter, they’re some of the most effective carbon storage systems we have. But could people make them even more effective?

Macreadie and colleagues pose that question, noting that present attentions are focused mostly on protection and restoration—which are unquestionably important, as roughly half of all vegetated coastal habitats have been lost to development, sea level rise, and extreme weather events. But even more is possible. Optimizing existing blue carbon ecosystems offers “the potential to profoundly alter carbon accumulation and retention,” write the researchers, “providing new and previously undervalued strategies for mitigating climate change.”

The researchers focus on three key environmental processes that control carbon breakdown and sequestration in these habitats. The first is nutrient pollution, especially nitrogen and phosphorus released from agricultural fertilizers and sewage, which leads to microbe and algae population shifts that reduce the amount of carbon stored by ecosystems. As a case study, they point to a 12-year-long study of a South Carolina salt marsh where fertilizer runoff produced a 40 percent loss in carbon stored in sediments.

The second process is bioturbation, or the disturbance of sediments by shrimp, worms, crabs, and other organisms. Bioturbation sets off a cascade of other processes, and when bioturbators are present at relatively low densities, they enhance carbon storage. But at high densities, the opposite is true. Macreadie and colleagues note findings from New England, where an overharvesting of crab-eating fish led to an explosion of purple marsh crabs whose activity eroded salt marsh habitat. Those marshes became carbon sources, releasing about 6.6 tons of carbon per hectare annually. Where crab predators flourished, though, the marshes sequestered some 3.3 tons per hectare—a dramatic turnaround.

Lastly the researchers discuss freshwater flows around the estuaries and coastal rivers where most vegetated coastal habitats are found. When unimpeded, these flows deliver carbon-rich inland sediments that are quickly buried by successive deposits, allowing sediment to rapidly lock up carbon. A proliferation of dams and weirs, however, prevent these sediments from reaching the coast. Macreadie’s group describes the benefits of unimpeded freshwater flows in Australia’s Hunter Estuary, where mangroves locked up more than twice as much carbon as they otherwise would.

Much remains to be learned about each of the processes, and some will be easier to manage than others. But reducing pollution, protecting predators, and restoring natural hydrologies offer a tremendous opportunity beyond the basic strategies of protection and restoration. And while some people might be nervous at the prospect of managing yet more of Earth’s ecosystems, Macreadie’s group counters that management will actually produce ecological states that are less-impacted by human activity than before. It’s a win for conservation and the climate.

Source: Macreadie et al. “Can we manage coastal ecosystems to sequester more blue carbon?” Frontiers in Ecology and the Environment. 2017.