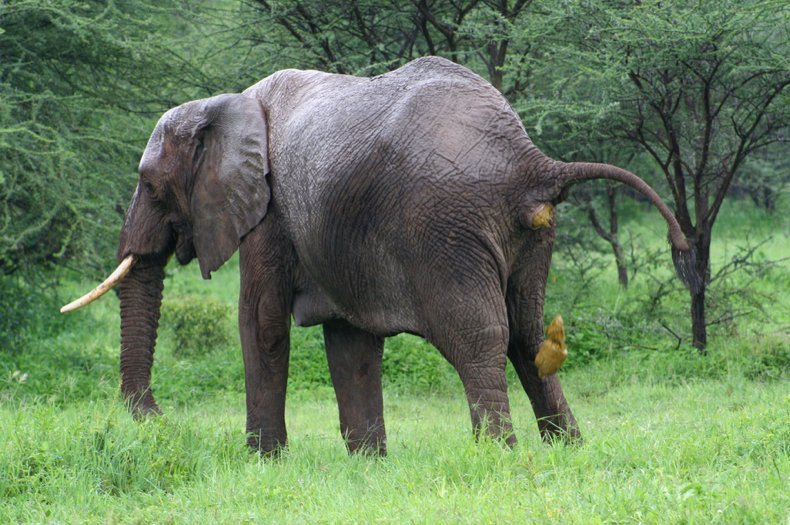 Fewer Big Herbivores Could Mean a Less-Verdant Anthropocene
Natural landscapes don’t spring into being spontaneously. A forest, for example, is a work of collective labor: countless generations of plants gathering nutrients from soil, and animals — especially herbivores — eating those plants and through defecation spreading their nutrients far and wide. These creatures literally fertilize the world, and if people want a more verdant future Earth, it’s high time to appreciate what they do.
By Brandon Keim
November 29, 2017

Natural landscapes don’t spring into being spontaneously. A forest, for example, is a work of collective labor: countless generations of plants gathering nutrients from soil, and animals — especially herbivores — eating those plants and through defecation spreading their nutrients far and wide. These creatures literally fertilize the world. If people want a more verdant future Earth, it’s high time to appreciate what they do.

“Large herbivores are especially important for the dispersal of vital nutrients,” writes Christopher Doughty, an ecologist at Northern Arizona University, in a study published in Nature Ecology & Evolution. He suggests that large Ice Age herbivores “may have increased nutrient concentrations on the continental scale” — an ecological service inherited across millennia and jeopardized by the ongoing decline of such animals.

Previous research has described the nutrient-distributing role of animals and also highlighted the importance of large herbivores, whose slow digestion times allow them to travel long distances before defecating and thus fertilize vast swaths of land. It’s been difficult, however, to precisely quantify their landscape-scale contributions.

To investigate this, Doughty analyzed the composition of coal, which is formed by fossilized plant and animal matter, from two geological periods: the Pennsylvanian, roughly 300 million years ago, when large herbivores had not yet evolved, and the Cretaceous, which began 145 million years ago and featured a whole menagerie of enormous plant-eating dinosaurs. If big herbivores are indeed important transporters of nutrients, reasoned Doughty, the chemical signatures of those coal deposits would reflect a difference in soil composition.

That’s exactly what he found. Nutrients important for plants and animals, such as magnesium, phosphorus, calcium and potassium, occurred in concentrations some 136 percent higher in Cretaceous than Pennsylvanian soils — the legacy, Doughty surmised, of sauropods feeding in floodplain wetlands and the lumbering far inland. Though those species are extinct, the ecological principles still apply, albeit in concerning ways.

“Today there are few large animals capable of distributing nutrients across landscapes and we also restrict such movement with fences,” says Doughty. “Nutrient loss is a slow process, but we are slowly starving our ecosytems of key nutrients.” He estimates that extinctions and hunting pressures during the last 12,000 years have reduced contemporary nutrient flows by more than 90 percent compared to their Ice Age values.

In addition to this across-the-board reduction, the absence of long distance-traveling big herbivores means nutrients may be spread unevenly. “Nutrient distributions will continue to become more and more patchy,” Doughty says. “Some areas will have far too many nutrients, causing eutrophication, and others may have too few.” The exact consequences are not yet known, but this will likely lead to long-term changes in plant abundance and distribution. Anthropocene soils may yield a less richly-vegetated world.

“Populations of large wild herbivores are currently at historical lows; therefore, we are potentially losing a key ecosystem service,” writes Doughty. “We should make a special focus to conserve our remaining large animals.”