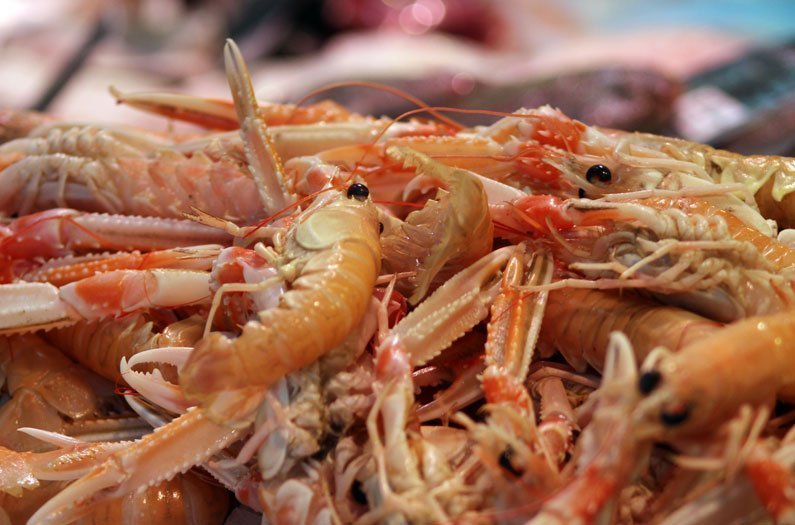 Carbon emissions of lobster and shrimp outstrip chicken and pork—and sometimes even beef
Between 1990 and 2011 emissions from fisheries have gone up by 28%--and it’s largely because of our appetite for lobster and shrimp.
By Emma Bryce
April 6, 2018

If you want to clean up your carbon footprint, cut lobster and shrimp from your diet. That’s what a new study suggests after finding that these fisheries chug through huge quantities of fuel and produce almost a quarter of global fisheries emissions.

The new Nature Climate Change study finds that since 1990, emissions from fishing overall have surged by a striking 28%, despite production staying the same. That means that the emissions load per ton of catch has shot up by 21% over just 20 years, because of more intensive fuel use. Our appetite for crustaceans, it turns out, is the primary culprit.

In just a few decades, the rising popularity of lobster and shrimp has driven a 60% increase in production, the study found. Paired with the more intensive fuel use that shrimp and lobster trawling methods require, these fisheries have become the biggest drivers of fishing-related emissions increase: today they account for 22% of the emissions total, despite making up just 6% of global catch landings. In fact, the results suggested that lobster and shrimp fisheries produced enough emissions to outstrip chicken and pork farming, and that certain fisheries even produced more than beef.

On the other hand, pelagic fisheries like anchovies and sardines accounted for a huge chunk of global landings, but just 2% of overall fisheries emissions, because of their more fuel-efficient capture methods.

The researchers made these detailed comparisons by combining data from a huge repository called the Fisheries Energy Use Database, with data on global fish landings. That made it possible to calculate the emissions by fishery, country, and year–spanning the decades between 1990 and 2011 to reveal the huge extent of change. This showed that in 2011 alone, fishing vessels used up an estimated 40 billion litres of fuel, which released 179 million tons of CO2 equivalent into the atmosphere.

Despite this, when taken as a whole fisheries emissions still did not come close to those produced by livestock farmed on land. But by identifying the most impactful seafoods–lobster ansd shrimp–the study highlights ways countries can reduce emissions at the national scale. According to the study, some estimates even show that making all types of fisheries more efficient, across the board, could slash fuel use by between 20 and 80%, which would bring about huge emissions declines. As countries battle to reduce their greenhouse gas emissions towards the global 2° C temperature cap, these kinds of nuanced solutions will only grow more important.

And, for those of us trying to reduce our own impact on the planet, there’s appears to be a new option on the menu: switching that prawn cocktail for a less fuel-intensive fish.