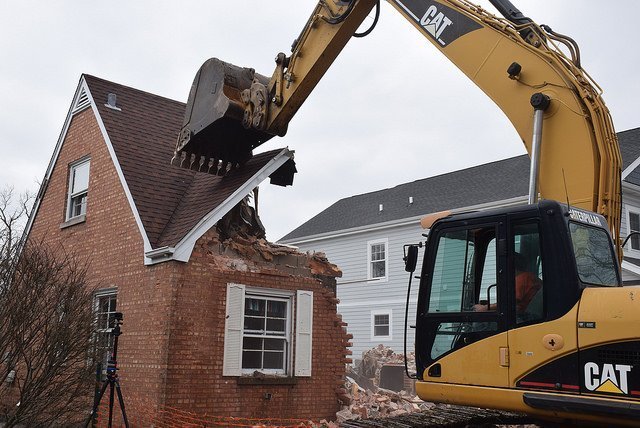 How energy-efficient new homes can lead to increased carbon emissions
It seems logical that a dwelling built with the latest energy-saving technologies would be better for the climate than a drafty old house. But replacing old houses with new ones can actually result in more carbon emissions than doing nothing.
By Sarah DeWeerdt
June 5, 2018

City governments are adopting energy-efficient building codes in an effort to decrease their local carbon emissions. And it seems logical that a dwelling built with the latest energy-saving technologies would be better for the climate than a drafty old house. But replacing old houses with new ones can actually result in more carbon emissions than doing nothing. A study of housing stock in Vancouver, Canada published in the journal Energy & Buildings shows why.

Researchers from the University of British Columbia and Mountain Math Software & Analytics put some numbers to these tradeoffs. They gathered data from local utilities and government databases to determine the typical operating emissions for existing single-family homes in Vancouver. Information about embodied emissions came from previously published life-cycle analysis studies of residential construction.

They used these data to calculate the “payback period” of new homes – the number of years it takes a newly constructed home to pay off the carbon debt associated with its construction via decreased operating emissions.

This analysis revealed that it would take an average of 168 years for a high-efficiency home built in Vancouver today to “earn back” its embodied emissions.

That citywide average takes into account the age distribution of current Vancouver housing stock. At the scale of the individual home, there’s a lot of variability. Older homes tend to have higher operating emissions, so the older the home that is replaced, the shorter the payback period.

Payback periods will also decrease in the future as Vancouver’s building codes get more stringent. The average payback period falls to 29 years after 2025, when the city’s Zero Emissions Building Plan mandates that new single-family homes have zero net operating emissions. However, some experts question whether the city’s plan is realistic.

In any case, it’s likely that many newly or recently built homes will be torn down and rebuilt again before ever paying off their embodied emissions debt. In Vancouver’s current red-hot real estate market, the teardown cycle is intense. Between 1985 and 2017, 40% of homes in the city’s residential areas were rebuilt.

“The teardown cycle is preventing many single-family homes from surviving long enough to ‘pay back’ the initial impacts caused by construction materials,” lead author Joseph Dahmen, professor of architecture and landscape architecture, said in a press release.

Dahmen and his collaborators calculated that teardowns will add 1.3 to 2.8 million metric tons of carbon emissions to the city’s ledger between 2017 and 2050. Those are greenhouse gas emissions that wouldn’t occur if we just left well enough alone and kept on living in existing homes.

The exact amount of excess emissions depends on how fast property values increase. Every 1% increase to the annual growth rate of property values translates into an additional 150,000 metric tons carbon dioxide emitted through 2050.

“The results show that at the scale of both the individual building lot and the city, the environmental benefits of tearing down and replacing even very poorly performing buildings are dubious at best in Vancouver,” the researchers write.

The calculus might be different in other cities. Vancouver gets a lot of its electricity from hydropower, which generates minimal carbon emissions. That lowers operating emissions for existing homes and therefore increases the payback time. In cities where electricity comes from coal, or where a harsher climate requires more energy for heating or cooling, replacing old homes with more energy-efficient ones could be more advantageous.

Even so, the study shows that cities need to look beyond efficiency standards for new construction in order to rein in carbon emissions from buildings. Vancouver should consider policies that discourage teardown and replacement of single-family homes, the researchers argue. Instead, the city could promote retrofits of existing homes, which can improve energy efficiency almost as much as building anew, with a much shorter payback period. Rezoning some residential areas to increase density – replacing single-family homes with rowhouses or low-rise apartment buildings – would also help by decreasing per-capita carbon emissions for the city’s residents.