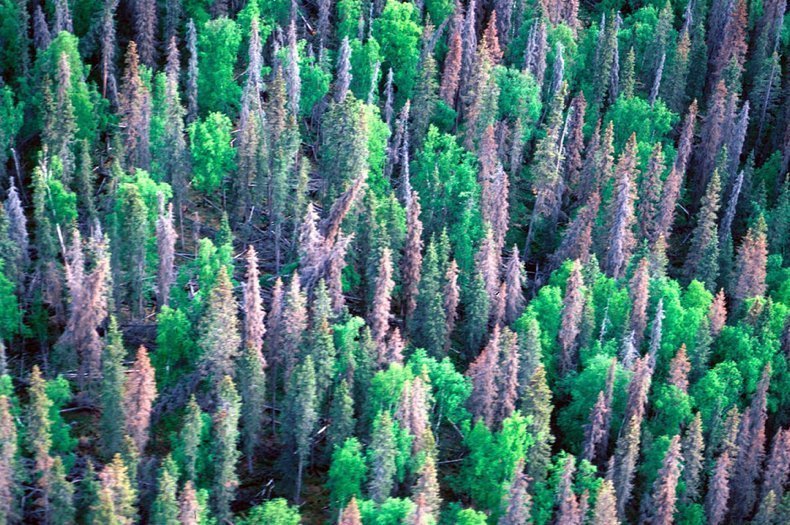 Western forests could adapt to pine beetles, but people won’t let them
Forests decimated by pine beetles may contain the seeds of future forests adapted to warmer temperatures and pine beetle attacks. As of now, however, people are managing afflicted areas in ways that may prevent their recovery.
By Brandon Keim
October 3, 2018

Though sporadic pine beetle outbreaks are a natural part of western U.S. ecosystems, a combination of climate change and drought have made them epidemic. The outbreaks are unusually large and intense, raising fears that pine forests may collapse — yet it seems that some trees are genetically predisposed to withstand attack.

They may contain the seeds of future forests adapted to warmer temperatures and pine beetle attacks. As of now, however, people are managing afflicted forests in ways that may prevent their recovery.

“Our forests have always been shaped by natural selection, and management largely ignores this,” says Diana Six, a forest entomologist at the University of Montana. “Trees contain some of the highest genetic diversity of any organisms on the planet. We should be working with this.”

In a study published in Frontiers in Plant Science, Six and colleagues describe their genetic analysis of trees in Vipond Park, a plateau in Montana’s Beaverhead National Forest where pine beetles recently killed 75 percent of mature lodgepole pines and 93 percent of whitebark pines.

The survivors proved to have a common genetic signature. That’s not particularly surprising, say the researchers: pine trees and pine beetles have shared that landscape for millennia, so natural selection would have favored resistant trees during previous outbreaks. And while the researchers don’t yet know the mechanism — perhaps survivors possess extra-hardy immune systems or produce beetle-discouraging chemicals — it certainly seems heritable.

Surviving trees, then, could be “key to developing management and trajectories that allow for forest adaptation,” write the researchers — and not just in Vipond Park, but across the west. Yet that resilience is threatened by so-called salvage logging, which often removes both dead and surviving trees from the landscape, and large-scale replanting projects.

The latter are an even greater threat than salvage logging, says Six, because they effectively dilute the survivors’ contributions to forest gene pools. Instead of a new forest descended from trees adapted to pine beetles and climate change, the trees are just as vulnerable as before.

Large-scale replanting with adapted trees isn’t yet feasible, says Six. Eventually she hopes to develop a hand-held sensor that can identify pines with beneficial traits. In the meantime, salvage logging and replanting should be undertaken with care. The lessons of this research may also apply to other forests threatened by climate change and pests.

“Supporting forest adaptation is critical in this time of rapid change,” write the researchers. We need to “support rather than hinder natural selection for traits needed under future conditions.”