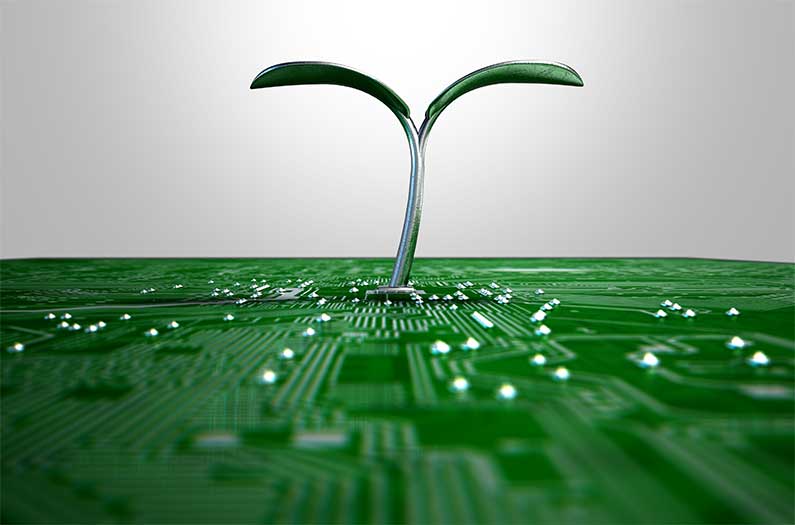 New Artificial Leaf Ready to See Light of Day
Researchers at the University of Chicago made a practical artificial leaf that works outside the lab by mimicking the way leaves absorb carbon dioxide from the air. The new design should be about 14 times more efficient than natural leaves at converting carbon dioxide into fuel.
By Prachi Patel
February 21, 2019

Scientists have for years tried to mimic plants’ ability to convert carbon dioxide and water into energy. But artificial leaf devices made so far have not worked quite as well in the real world as they do in the laboratory.

For a practical design, researchers at the University of Chicago took a leaf from nature’s book. By copying the way leaves absorb carbon dioxide from the air, they have made an artificial photosynthesis system that they say will be about 14 times more efficient than natural leaves at converting carbon dioxide into fuel.

Artificial photosynthesis systems consist of high-efficiency solar cells coated with catalysts that can split water molecules. Many different designed have been reported before. But so far “all designs for artificial leaves that have been tested in the lab use carbon dioxide from pressurized tanks,” says Meenesh Singh, a chemical engineer who led the study published in ACS Sustainable Chemistry & Engineering. That’s because they lack an important component: stomata, or the tiny openings on leaves through which they take in carbon dioxide and release oxygen.

Singh and his colleague Aditya Prajapati encapsulated a traditional artificial leaf device in a permeable membrane that is made of tangled fibers of an ammonium resin. The membrane is drenched in a water-based electrolyte.

Under sunlight, the water slowly evaporates out through the pores. To replace that volume, the resin selectively sucks in carbon dioxide, which the artificial leaf inside converts into carbon monoxide. The carbon monoxide can then be directly converted into fuels and other chemicals.

These systems more closely mimic leaves but are about 14 times more efficient than natural leaves, the researchers write. They are also modular and scalable. Calculations show that 360 of these leaves, each 1.7m x 0.2m, covering a 500 square meter area would produce around 0.4 ton of carbon monoxide per day and reduce carbon dioxide levels by 10 percent in the surrounding air. The system could also be designed to produce fuels directly from air, water and sunlight.