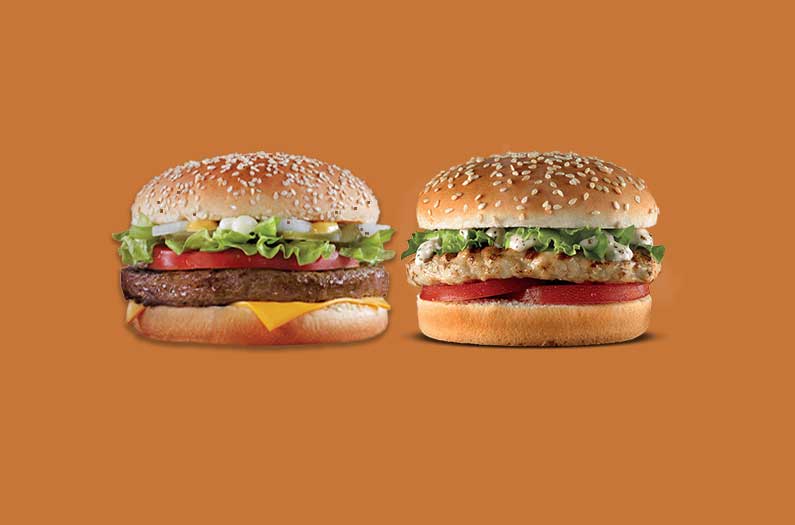 Choosing one over the other will halve your dietary carbon footprint
For meat-lovers in America, a simple dietary switch could lead to huge emissions savings for the planet.
By Emma Bryce
July 12, 2019

Switching beef for a portion of chicken or turkey would cut the emissions of the average American diet by more than 50%, new research shows. This means that people wouldn’t necessarily have to forgo meat to substantially reduce their environmental impact: one simple, conscious change could bring about impressive emissions savings.

The new findings, from a team of Tulane and University of Michigan researchers, was based on findings from the US National Health and Nutrition Examination Survey, a huge database of information on the daily diets of more than 16,000 Americans, collected between 2005 and 2010.

Looking at all the foods people listed in the survey, the researchers made a parallel inventory of their environmental impact, which they used to identify diets among the 16,000 that had the highest emissions. Taking a random sample of 330 from these high-impact diets, the researchers then pinpointed the food ingredient which produced the most emissions in each case.

They found that in 52% of those 330 diets, a cut of beef had the greatest emissions, followed by 33% which had mixed dishes containing beef. Dishes containing shellfish made up 10% of the remaining high-impact diets. Next, the researchers swapped out these high-impact foods with a similar but lower-emissions meat protein – such as chicken for beef steak, and turkey mince for ground beef.

It’s no surprise that chicken has a lower impact than beef. But what was surprising was just how large the impact of this switch turned out to be: the exchange from one to the other would cut emissions by 54% in the average beef-heavy diet.

Like so many studies before it, this emphasises beef’s outsized emissions impact, which occurs thanks to cattle’s large expulsions of methane, and heavy land-use requirements. But it also shows that the way to reduce this footprint doesn’t necessarily have to be totally vowing off meat.

The changes were observed at the level of individual daily diets only, but “if promoted on a wide-scale basis, such a strategy could substantially reduce greenhouse gas emissions from the U.S. diet,” the researchers believe.

The findings follow on the heels of another study from the same group, which used the same dataset to analyse the effect of daily diets in the US more broadly. This separate investigation showed that lower-impact diets tend also to be healthier – lower in meat and dairy products, salt and saturated fat – underscoring the double benefits of lower-emissions-eating. Indeed, there’s a growing appreciation that replacing meat with plant-based protein will give us the best shot we have at reducing the vast emissions-impact of modern food production.

But what’s novel about the researchers’ newest findings is that for consumers who do choose to continue eating meat – which, if we’re being realistic, will be millions in the US who remain unswayed by the current vegan and vegetarian wave – they won’t necessarily need to make huge dietary overhauls to reduce their carbon footprint. All it would require, according to this study, is switching beef for chicken, more often than not.

Meat and dairy alone account for 14.5% of global greenhouse gas emissions, and we can’t eradicate that without completely vegan diets. Yet, we can significantly lessen our impact, with more mindful decisions about which meat we eat.