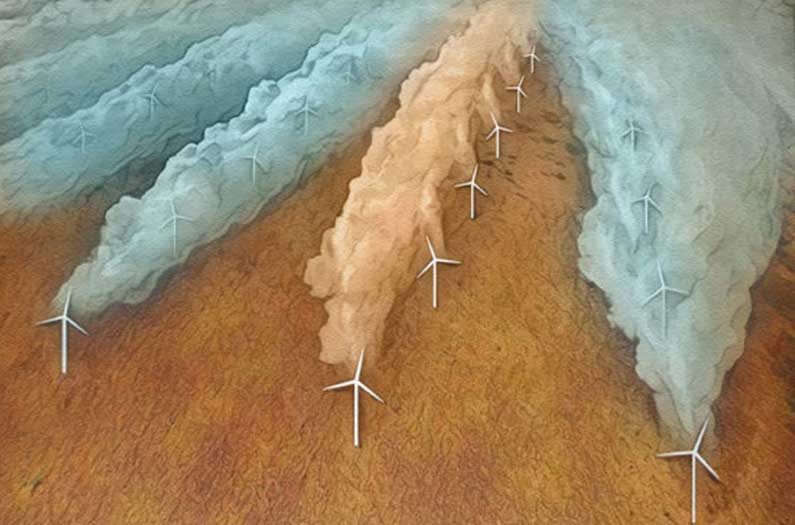 Wringing more power from wind farms by fine-tuning their tilt
Orienting wind turbines slightly away from oncoming wind keeps their wake from interfering with the output of other turbines. This was known, but the first real-world test of this idea shows how much it can boost the combined output of wind turbines.
By Prachi Patel
July 18, 2019

Just like ships and airplanes create a stream of turbulence that slows down vessels behind them, wind turbines chop up air and drag down the output of downstream turbines. But orienting a turbine slightly away from oncoming wind diverts its wake away from other turbines. And now by performing tests at a wind farm, researchers from Stanford University have shown that this “wake steering” scheme can boost the combined output of a group of turbines by up to 13 percent. Plus, it also smoothens the output and should reduce operation costs, the researchers say in Proceedings of the National Academy of Sciences.

Single wind turbines are the most efficient when they directly face oncoming wind. But things change when turbines are placed together on a farm. The wakes of slower, low-energy wind created behind turbines can cause significant power losses. At the Horns Rev offshore wind farm in Denmark, for instance, wake losses can reduce annual energy production by around 20 percent. “With wind farms increasing in size and quantity, wake losses are becoming an increasingly important factor in wind farm efficiency,” the researchers write in their paper.

Computer modeling studies done previously have shown wake steering can increase wind farm power output. But no one has been able to test this on real-world turbines yet.

The Stanford team was able to collaborate with Calgary-based wind farm operator TransAlta Renewables. The wind farm in Alberta was designed for high-speed flow from the southwest, but low to moderate speed winds blow in at night from the northwest occur during the summer and fall. These winds blow straight at the turbine rows and cause significant wake effects.

In their experiment, the researchers wanted to optimize the turbines’ angles for these northwest winds. So they first calculated the best angle for the turbine rotors based on five years’ worth of data on power generation, wind speed, and rotor direction. Then they tested a row of six turbines set at this angle for 10 days.

The results were dramatic. The overall power output of the turbines increased by up to 47 percent in low wind speeds and by 7 to 13 percent in average wind speeds. These numbers could be much higher in modern commercial turbines whose angles could be adjusted dynamically using the algorithm.

Wake turbulence can also cause minute-by-minute fluctuations in a farm’s power output, which makes it hard for operators to match grid power demand. The wake-steering scheme reduced this variability by up to 72 percent, the researchers found. Plus, by reducing the strain on turbines due to the turbulence, it should also bring down operating costs.

The researchers now plan to run tests for an entire year.