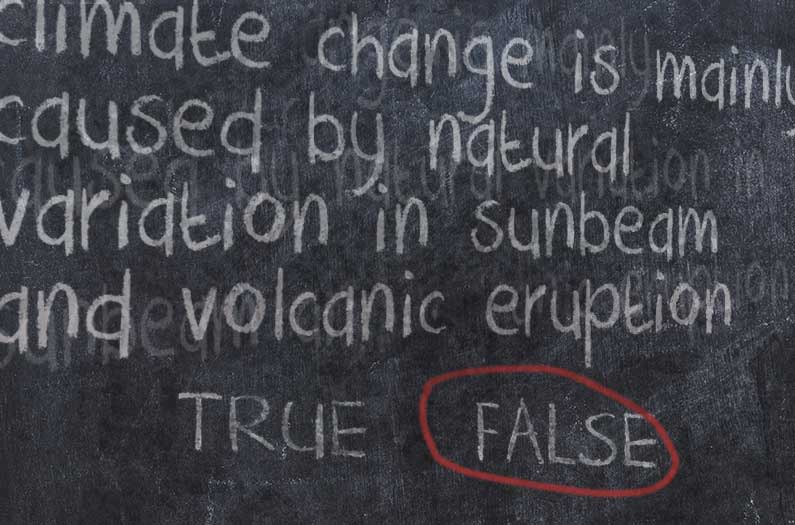 People have more trouble identifying climate falsehoods than truths
Members of the general public have a pretty decent grasp of climate science, but they’re not as confident in that knowledge as they should be.
By Sarah DeWeerdt
October 1, 2019

The good news: Many members of the general public have a pretty decent grasp of climate science, according to an online survey conducted by researchers in Germany. The bad news: they’re not as confident in that knowledge as they should be.

Why that matters: discussions of climate change in the media and elsewhere are often a mixed-up stew of accurate science, uncertainty, and outright disinformation. In such an environment, it’s easy for tentative truth to be swamped by false certainty.

Until now, most research on the public’s climate change knowledge has focused on the accuracy of that knowledge. But the new study, published September 9 in Nature Climate Change, makes the case that people’s confidence in their knowledge is an important aspect of climate change psychology too.

Researchers recruited 509 German adults to take an online survey about climate science. Participants evaluated eight true-false statements such as, “Science says that carbon dioxide concentration in the atmosphere has increased more than 30% during the past 250 years” (True) and, “Science says that climate change is mainly caused by natural variation in sunbeam and volcanic eruption” (False).

For comparison, the researchers administered the same survey to a group of 207 scientists working in climate change research. They also administered a similar survey about general scientific knowledge to a separate group of 588 Germans.

On average, members of the public got 60% of the climate change answers right – not too shabby, although predictably not as good as the climate scientists, who answered correctly 86% of the time on average.

Members of the public had a lot more trouble picking out false statements about climate change than true ones. What’s even more interesting is that they thought they were good at identifying the falsehoods.

Ideally, if people don’t know something they should also express low confidence in their answer. That is, they would know the limits of their knowledge.

In fact, this is the case when members of the public answer general science questions, and when scientists answer questions about climate change. Both of those surveys showed a correlation between the accuracy of people’s answers and their confidence in those answers.

When it comes to the general public’s climate change knowledge, though, that relationship holds only for true statements about climate change.

When evaluating true climate change statements, members of the public knew what they knew, and their confidence was justified by their accuracy. If anything, they tended to be underconfident in their knowledge.

But for false climate change statements, members of the public seemed to have no idea that they didn’t know. They tended to be overconfident in their knowledge, endorsing some false statements with high confidence.

Accurate confidence in knowledge is important for decision making in uncertain conditions. A physician too confident about an initial diagnosis could prematurely rule out other possibilities, for example. And a physician lacking in confidence might delay making a diagnosis and recommending treatment.

Past studies have shown that people can’t put knowledge into practice unless they’re sure of it. In addition, people tend to trust information from more confident informants. Such findings suggest that a lack of confidence in climate change knowledge could hamper people’s ability to take action against climate change or to persuade others.

That said, members of the public might also be vulnerable to climate change disinformation that has a ring of truth about it.