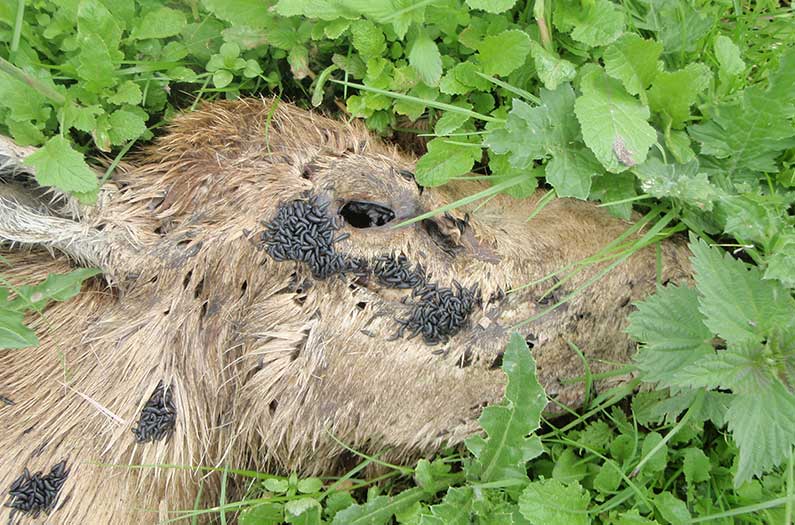 A very modern question: what to do with the bodies?
The sight of a big, dead animal is not pleasant, but their bodies provide vital nutrients to the landscapes where they fall—if people don't take them away.
By Brandon Keim
February 5, 2020

For better and for worse, the sphere of human management often includes populations of big, wild quadrupeds whose populations swell in the absence of predators and migration routes—which raises the question of what to do when these animals die.

Often people want to gather the carcasses. Sometimes they’re worried about disease; sometimes they find the presence of dead bodies unpleasant. But this penchant for removing the bodies of big animals is depriving landscapes of a vital source of nourishment.

“Carrion of large animals is an extremely nutrient rich, ephemeral resource that is essential for many species, but is scarce in the anthropogenic Western European landscape due to legislative restrictions,” write researchers led by ecologist Roel van Klink of the University of Leipzig in the journal PLOS One.

The researchers studied what happened to the bodies of red deer who died in Oostvaardersplassen, a small human-made wetland-turned-nature reserve in the Netherlands, where conservationists have established herds of deer, horses, and cattle in an attempt to re-create the ecological conditions that once prevailed across across much of Europe.

As biodiversity flourished, Oostvaardersplassen became famous as an example of rewilding and ecological resilience. Without predators or the ability to migrate outside the reserve’s fences, herbivore populations outstripped available food, it also became infamous as a site of mass starvation.

That controversy is not the subject of the new study. Rather, van Klink and colleagues took the opportunity to document what happens to and around carcasses. Carrion-eating flies and beetles flourished; what they and larger animal scavengers didn’t eat entered the soil, nourishing plants that grew several times larger around the carcasses than elsewhere in the reserve.

These plants in turn supported swelling populations of the insects associated with them, which then benefited the predators of those insects. All in all, it was an upwelling of life that lasted for months following a deer’s death and spread throughout local food webs—but that upwelling is often prevented from happening, say the researchers.

In Europe, livestock carcasses are required by law to be removed from the landscape. Only in parts of southern Europe are they left intact as part of a vulture conservation strategy. That isn’t just an issue for farmlands; many nature reserves now use low-density grazing by livestock to mimic historic processes, but if those animals become sick or die, historic fidelity ends and the animals are removed.

This is “a shame from a conservation perspective, especially when the reinstatement of natural processes is a goal,” says van Klink. “A little big of flexibility with carrion disposal regulations could really benefit plants and insects.” And while this situation is most pronounced in Europe, similar dynamics can be found in parts of North America and Australia where livestock are incorporated into ecological management or arguably over-abundant herbivores—such as white-tailed deer in eastern U.S. suburbs—are culled.

So long as their bodies are removed, so is their ecological role. Death might not be easy on our eyes—but it’s an essential part of life.