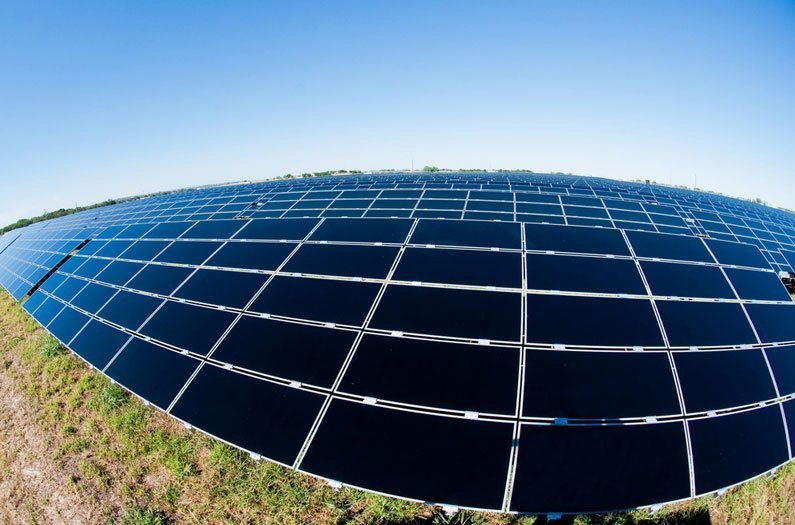 What if the whole world went solar?

Widespread installation of solar panels would have cascading effects on the climate
By Sarah DeWeerdt
November 3, 2015

One of these days, we are all going to have to make the switch to renewable energy – if not out of concern about climate change then simply because fossil fuels will eventually run out. But even sustainable energy technologies may have an effect on global climate, according to a study published yesterday in Nature Climate Change.

In the study, researchers used computerized climate models to investigate what would happen if the world’s entire energy supply were converted to solar. They assumed that solar panels would be installed in the major desert regions of the world, where the supply of sunlight is greatest, and in urban areas, where the demand for power is greatest.

In turn, this has cascading effects on the climate. At a global scale, the changes from solar panel installation are small compared to those predicted to occur due to greenhouse gases. But at a regional level, some of these climatic shifts could be significant, the researchers say.

Average temperature in desert regions would decrease by about 2 degrees Celsius. Desert precipitation could also decrease by over 20%, largely because the presence of solar panels also reduces cloud cover.

According to the researchers’ model, this desert cooling would lead to changes in in wind patterns, a shift in the location of the jet stream, and altered precipitation levels for many regions.

Much of Asia, parts of the Middle East, Australia, and the tropical Pacific would lose up to 25 centimeters of average annual precipitation. Instead, that precipitation would shift to Europe, the North Pacific, western North America, tropical Africa, and the southeast Indian Ocean. (These patterns are opposite to those predicted to arise from greenhouse gas-induced warming.)

The study presents an extreme scenario: the researchers assumed that 100 percent of land area in cities and deserts would be covered with solar panels, which isn’t realistic. And those solar panels would generate almost 800 terawatts of power, much more than the world is likely to need. But the researchers say this sort of exercise can reveal mechanisms underlying the climate system and help interpret the results of more realistic modeling exercises.

So they also constructed a version of their model that more accurately reflects likely future demands for power. In this scenario, solar panels would be installed across urban areas worldwide and in a portion of the Egyptian desert, covering about 10% of the total land area devoted to solar panels in the first version of the model.

Here the patterns of surface temperature change are similar in broad strokes to those seen in the extreme version of the model, but much more modest. For example, global temperature would decline by about 0.04 degrees Celsius, the researchers found.

This smaller global solar grid would produce about 59 terawatts of power per year. That’s still plenty sufficient to cover global demand for electricity, which the Intergovernmental Panel on Climate Change has estimated to be, at most, 45 terawatts per year by 2100.

So the good news is that the sun provides more than enough energy to meet the demands of humanity for the forseeable future. But the disconcerting news is that those demands are so great that even at our most sustainable, we humans are likely to leave a marked environmental footprint.