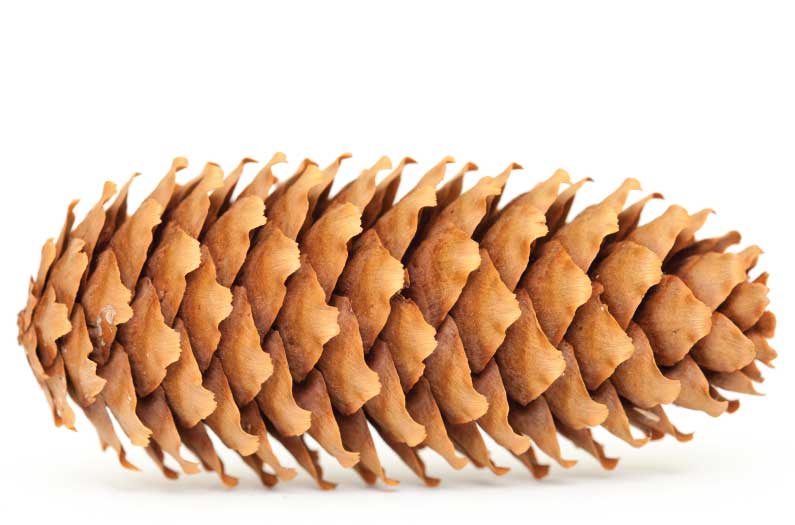 A new material to capture carbon dioxide comes from a surprising green source: spruce cones. And, as scientists report in the journal ACS Sustainable Chemistry & Engineering, it performs just as well as other solid carbon-scrubbing materials.

Many experts believe that trapping carbon dioxide at their source—be it car exhaust pipes or industrial smokestacks—and stashing it underground will be important to reduce carbon emissions and fight climate change.

The benchmark technology for absorbing carbon is to use solutions of ammonia-derived compounds. But this method is much too expensive to be used on a large-scale. Various other engineered materials that are excellent at removing carbon face similar issues: they’re costly, difficult to make, or come from petroleum sources.

So a team of researchers led by Zhengxiao Guo, a chemistry professor at University College London, set out to make a low-cost, abundant, and renewable carbon sorbent from biomass waste. Others have made porous carbon materials from biowastes such as palm shells and leaves. But Guo and his colleagues turned to spruce cones.

They picked up fallen cones from Norway Spruce trees, peeled and washed the cone scales, and then burned them in a furnace at 600°C for an hour. They ground the charred black carbon residue into smaller particles. Finally, they treated it with potassium hydroxide and nitrogen. The result is tiny carbon particles of random shapes and sizes that are extremely porous, which gives them a high surface area.

The researchers exposed the material to a nitrogen-carbon dioxide gas mixture containing 15 percent by weight of carbon dioxide, the same as in an industrial flue gas stream. They found that it took up 21 percent of its weight in carbon dioxide. This capacity matches that of costly, state-of-the-art engineered sorbents called metal-organic frameworks.

This high carbon uptake results from the material’s high porosity as well as from the naturally-present nitrogen and calcium that remains in the material. These elements enhance the binding of carbon dioxide gas to the carbon material.