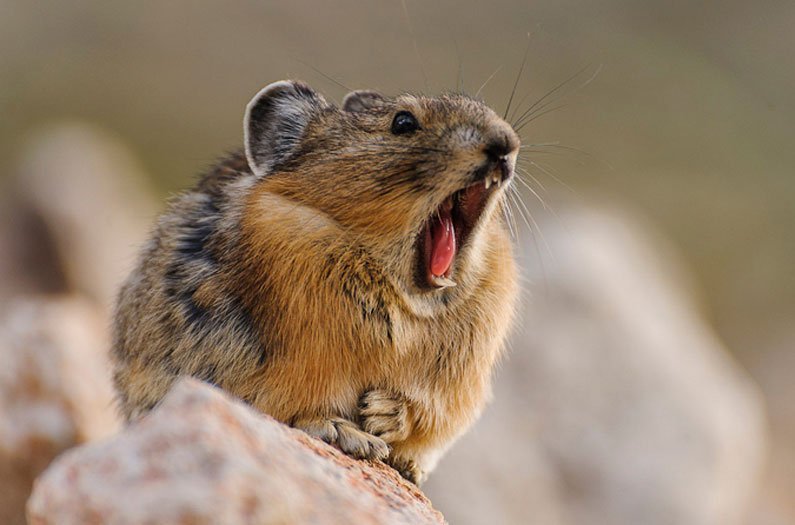 Pikas have some fight in them yet

Because they have a fairly low tolerance for heat, pikas have often been thought of as sentinel species when it comes to climate change. In some of the warmer parts of their native range, they’re already extirpated. But these hardy creatures just might have a few tricks up their sleeves.
By Jason G. Goldman
February 3, 2016

You heard it here first: American pikas are the most adorable of all the lagomorphs. These rabbit relatives live in relatively cold places and prefer rocky mountainsides, which offer plenty of nooks and crannies to escape from the raptors that would make a quick meal out of them. Because they have a fairly low tolerance for heat, pikas have often been thought of as sentinel species when it comes to climate change. If pikas can’t do well in a certain ecosystem, that ecosystem is probably too warm overall. In some of the warmer parts of their native range, they’re already extirpated. But these hardy creatures just might have a few tricks up their sleeves, according to a new study. In some places they very well may go locally extinct, but 100 years from now we can still expect some pika to cling to existence.

Here’s one trick: at low elevations and in warmer climates, the rocks they like to lounge under can still offer cooler microclimates that are comfortable enough. As Oregon State University post-doctoral researcher Donelle Schwalm writes in the latest issue of Global Change Biology, “the relationship between pika occurrence and climate can be highly variable and even counterintuitive.”

A team of researchers led by Schwalm used information about pika habitats and movement behavior to model the species’ distribution among eight national park areas in the Western US, and used that model to predict where pikas might yet survive 90 years from now. The findings are part of a larger NPS-funded project, called Pikas in Peril, which was launched in 2010.

While most of the pikas’ current range is expected to become generally unsuitable for them, the predicted outcomes for the critters vary quite a bit from place to place. Crater Lake National Park, for example, has the highest elevations among the eight sites; if it gets too warm, there will be few spots left for pikas to persist. Most pika habitats in Rocky Mountain National Park are on south-facing, sun-exposed slopes. Combined with changes in habitat connectivity, it’s unlikely that pikas will continue to find a home here. On the other hand, Grand Teton and Lassen Volcanic National Parks both have high levels of connectivity between pika habitats, and increasing snow and rain will probably allow them to stick around.

While most climate data exist at very large spatial resolutions, most animals are sensitive to conditions on a much smaller scale. Pikas are expected to do better on north or east facing slopes, for example, than on warmer south facing ones. That’s why the researchers call for higher-resolution climate date, “which better reflect the scale at which organisms interact with the environment.” Most current climate-related projections are insufficient to predict how animals will respond, especially ones sensitive to the minor environmental fluctuations that can vary across a few dozen meters.

The study provides researchers with a blueprint for pika conservation. It makes more sense to focus efforts and resources on pika populations expected to persist, rather than those that will probably disappear within the next century.

Or, says NPS researcher and study co-author Thomas J. Rodhouse, perhaps it makes sense to move pikas from vulnerable areas to more optimal ones, or to enhance vulnerable habitats to provide better connectivity. “You have to examine whether that is something we should be doing in a National Park,” he says in an official statement. “But this study allows us to begin having these strategic discussions.”