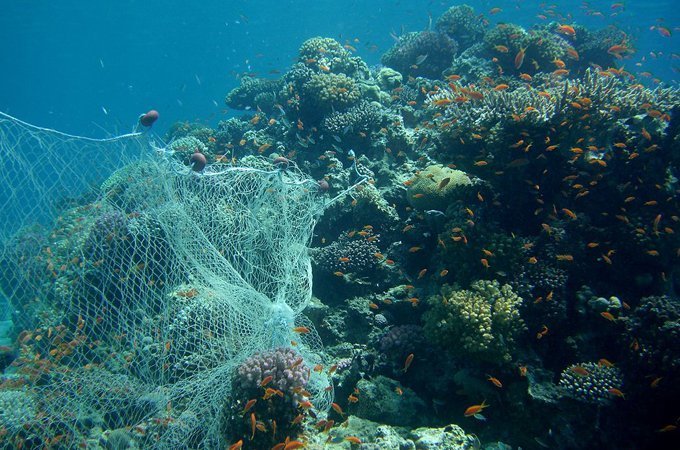 Biodegradable gillnets could help rid the ocean of ghost fishing

Researchers have found that biodegradable gillnets catch fish as well as conventional nylon nets—and more quickly lose their ability to entangle animals when discarded at sea. Even more, the degradable nets tend to trap fewer young fish and bycatch.
By Catherine Elton
March 18, 2016

Researchers have found that biodegradable gillnets catch fish as well as conventional nylon nets—and more quickly lose their ability to entangle animals when discarded at sea. Even more, the degradable nets tend to trap fewer young fish and bycatch.

Fishing nets that have been lost, abandoned, or discarded at sea account for ten percent of all the marine litter circulating in the world’s oceans. These 640,000 tonnes of nets aren’t just a plastic pollution problem, however. Long after they are lost, they continue to fish at sea on their own, trapping not only fish but seabirds and mammals in a phenomenon known as ghost fishing.

To combat this problem, researchers have been developing gillnets made of biodegradable materials, but the challenge has been to make them as good at catching fish as conventional gillnets are. In one of the most comprehensive studies to date, researchers assessed the fishing performance of a biodegradable gillnet at sea and its degradability in the lab. The results, published recently in Animal Conservation, provide some good news.

“Using a biodegradable net didn’t have much impact on how many adult fish were caught, but when it came to young fish and bycatch of other species, they caught much less,” says co-author Petri Suuronen. “That was a positive surprise.”

The fishing performance of the biodegradable nets were tested during six outings of a commercial yellow-croaker fishing vessel in the waters off southwestern South Korea. The biodegradability of the nets was tested by placing 30 sets of net samples in plastic containers at sea. The researchers used a scanning electron microscope to assess the samples every two months for four years. They also measured the strength, flexibility, and other physical properties of the nets, comparing them to conventional nets.

Researchers found the biodegradable gillnets to be stiffer, which they initially thought would affect performance, says Suuronen. They were pleasantly surprised to find out that it did not. Their stiffness may be why they caught less bycatch and juveniles, however, Suuronen says. Researchers found that it took 24 months for the biodegradable net to begin to rot, and that the degradation rate was higher in warmer water. Although they didn’t test the degradability of conventional nets in this study, the literature shows that these nets can take several years or even decades to degrade, the authors said.

“I still think two years is too long,” says Suuronen, who works for the Fishing Operations and Technology Branch of the Food and Agriculture Organization. “But it is a lot faster than nylon.”

Suuronen says he hopes that continued research and development can produce a net that degrades even faster. That said, it can’t degrade much faster than the studied net, otherwise it wouldn’t be an attractive purchase for fisherman.

Of course, even more important than designing the perfect biodegradable fishing net, Suuronen says, is ensuring that fewer nets are lost and discarded at sea in the first place.