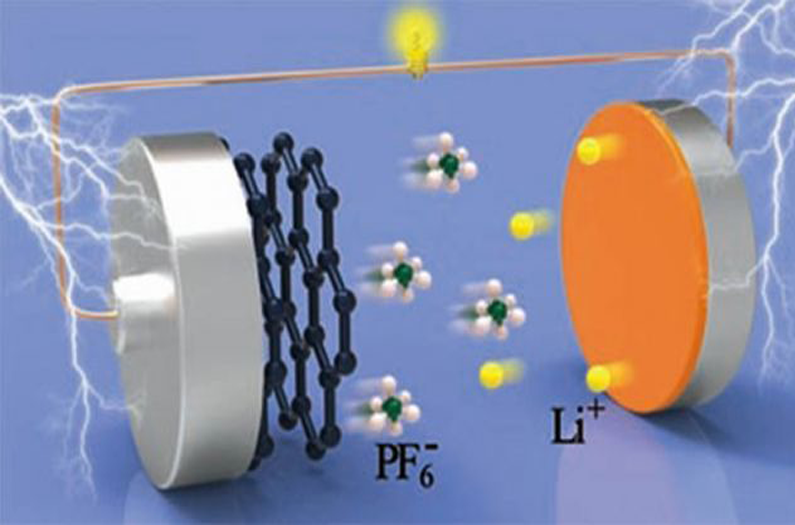 Researchers have developed a new rechargeable battery that they say will be lighter, smaller, cheaper, and more environmentally friendly than today’s lithium-ion batteries. The new battery uses low-cost and plentiful aluminum instead of lithium metal for its electrode material.
By Prachi Patel
March 31, 2016

Researchers have developed a new rechargeable battery that they say will be lighter, smaller, cheaper, and more environmentally friendly than today’s lithium-ion batteries. The new battery uses low-cost and plentiful aluminum instead of lithium metal for its electrode material.

Lithium-ion batteries power our phones, laptops, and electric vehicles. With more electric cars slated to get on the road in the coming years, the worldwide demand for lithium batteries is booming. This raises environmental concerns from mining lithium as well as the toxicity of the compounds used in the battery’s electrodes. Besides, lithium battery technology is reaching its limit in terms of energy density, the amount of energy it can store by weight or volume.

In their new battery reported in the journal Advanced Energy Materials, researchers at the Chinese Academy of Sciences swapped the lithium metal cathode with one made of aluminum. They paired this with a typical graphite anode and a lithium salt electrolyte.

The aluminum-graphite battery should be about 50 percent cheaper to produce, said Tang Yongbing, who led the work, in a press release. It has an energy density of around 150 Watt-hours per kilogram of weight, which is about 50 percent more than what a commercial lithium-ion battery delivers at the same power rating.

Aluminum is an attractive material for rechargeable batteries, and several other research groups are also working on the technology. A key challenge with the technology is to find materials that can repeatedly charge and discharge after several hundreds of cycles. The Chinese team tested their battery for 200 cycles, but it will have to last for at least 1,000 cycles to become practical.