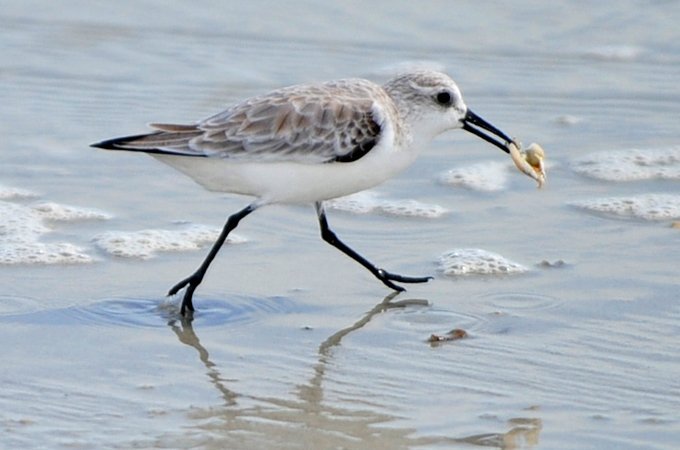 Does beach replenishment smother a shorebird’s next meal?

The total number of invertebrates falls by more than half in the wake of beach replenishment, according to a new study. And the invertebrate community may take longer to recover than previously thought.
By Sarah DeWeerdt
April 5, 2016

Around the world, sandy beaches are eroding, and communities are increasingly fixing this problem by dredging up sand from offshore and pumping it back onto the beach. This method, known as beach replenishment, is seen as more environmentally friendly than building hard structures like seawalls to protect beaches.

In the study, researchers from the University of California, San Diego tracked the effect of beach replenishment undertaken during fall 2012 at eight San Diego-area beaches. Each beach had a replenished area and an area that was left alone for shorebirds and fish to forage.

Kohn and his team took a series of sediment cores from the intertidal zone 1, 4, 12, and 15 months after replenishment, and recorded the number and types of invertebrates they found in the sand. They identified 20 different groups of invertebrates, of which the most abundant were mole crabs, polychaete worms, sand fleas, and bean clams.

At the one-month mark, control sites were host to three times as many kinds of invertebrates as replenished sites, the researchers found. Invertebrate diversity rebounded to normal levels by 15 months after replenishment.

Even so, the structure of the invertebrate community – meaning the relative abundance of different kinds of organisms – remained altered at some replenished sites 15 months later.

Replenishment also caused a drop in the number of invertebrates present in the intertidal zone. Even 15 months later, overall invertebrate abundance at replenished sites was just 48 percent of that at control sites.

This pattern was mostly due to the large and lasting suppression of polychaete densities at replenished sites. Curiously, other studies have found that beach replenishment has no effect on polychaetes or even tends to increase their numbers.

Other invertebrate groups fared differently: the numbers of both bean clams and sand fleas recovered within a year, which is more quickly than has been seen in previous studies.

Mole crabs had a population boom on some beaches 4 months into the study, which was probably part of a natural population cycle and unrelated to the replenishment. At that point, the number of mole crabs was even higher on replenished sections of beach than on control sections, but the researchers aren’t sure why. Later, mole crab densities declined and their numbers at control and replenished sites equalized.

Overall, the researchers found that the distribution and abundance of invertebrates was highly idiosyncratic from beach to beach in control as well as replenished areas. That makes it hard to generalize about the effects of replenishment, even within a single region. This variability could also help explain why previous studies of beach replenishment have yielded inconsistent results.

Despite these uncertainties, researchers note that the project’s Environmental Impact Statement predicted that the invertebrate community on replenished sections of beach would return to normal within a year. That didn’t happen, suggesting that future projects need to take into account the possibility of longer recovery times.