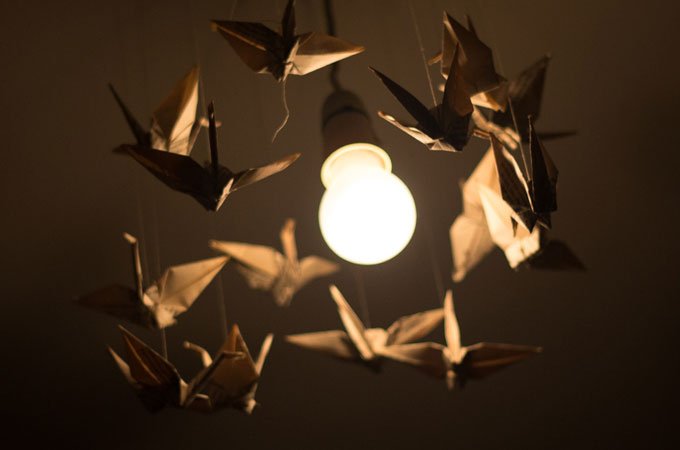 It's well known that lights on tall communication towers can disorient birds, but it seems lights closer to the ground, like porch lights, can as well.
By Jason G. Goldman
April 20, 2016

The glow of porch lights attracts a scrumptious bounty of moths and other insects for hungry geckos, who in turn bask in the lights’ warmth. But those very same lights spell trouble for another group of animals: birds. Scientists have come to understand that lights adorning tall structures can disorient nocturnally migrating birds while on the wing. But the vast majority anthropogenic lights—porch lights, street lamps, and of course car headlights—are effectively at ground level. According to University of Windsor biologist Matthew J. Watson, “little research exists on the influence of ground-level lights on migratory birds.” That’s what he and his colleagues decided to change.

To do it, they focused on the autumn 2013 migration near the Great Lakes in southern Ontario, Canada. They were particularly interested in nocturnally migrating birds, since that’s when our artificial lights are most salient. The Great Lakes area is along a busy migratory flyway, a narrow space over which thousands or perhaps millions of birds fly each year. The main question was whether the birds produced more flight calls—a sort of avian game of “Marco Polo” intended to keep the flock together—while passing over lit areas than over equivalent dark ones. If lit areas were more disorienting, then more birds would produce more calls there than over the darker areas, according to this logic. The study was published in The Condor.

In all, the researchers accumulated 352 hours of recordings from 32 nights, and 1,913 nocturnal flight calls from 15 different kinds of birds. This included American redstarts, a handful of warbler species, a few sparrow species, and some thrushes, among others. Microphones placed in lit areas recorded far more of the birds’ calls than those in dark areas. The recorders captured a median of 31 calls per night at the bright sites, and just 10.5 calls per night in dark spots.

Since flight calls are probably used to maintain flock cohesion, it stands to reason that birds produce more of them in lighter areas because the light causes disorientation. But it’s also possible that anthropogenic light attracts migrating birds, meaning that microphones in those areas would therefore record more of them. Indeed, lights on oil platforms and lighthouses attract lots of birds, often with fatal consequences. If birds were similarly attracted to lower-elevation lights, then this could just as easily explain the results. To find out if birds actively change their flight paths due to lights, the study could be repeated, Watson writes, with the addition of radar tracking.

What’s clear is that that our artificial street-level lights have some kind of effect on nocturnal migrating birds. What isn’t clear is just what that effect is. Our lights are probably detrimental, however. Calling more often while above lit areas causes the birds to expend vital energy that they would otherwise be able to use for flight. That could render them unable to survive their migrations—or cause them to arrive at their destinations later or in poor physical condition. And this could make birds less successful at mating and raising their offspring.

Of course we’re not going to start removing porch lights and streetlights from our cities and towns, but if we can figure out exactly how birds are affected by those lights, then we can be better positioned to minimize their detrimental effects.