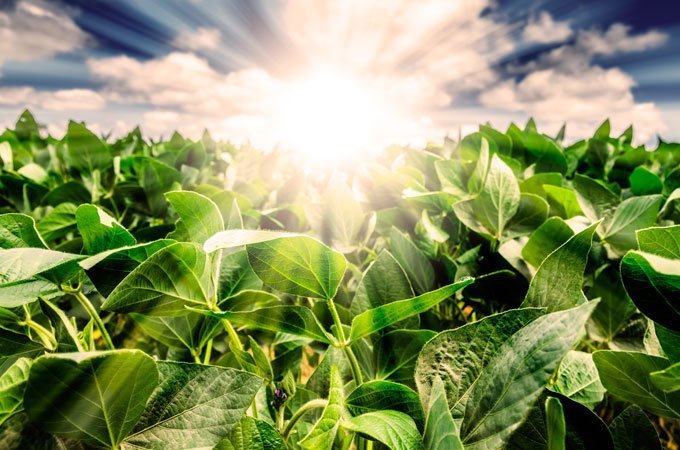 The overall benefit of rising atmospheric carbon compensates for the negative effect of rising temperatures for wheat and soybean, and significantly mitigates those effects for rice and maize.
By Catherine Elton
April 29, 2016

When we think of the earth’s farmland in a hotter, more drought-prone future, a picture of parched, barren wastelands might come to mind. But that is only part of a larger picture, because rising temperatures are just part of the equation. Rising carbon dioxide concentrations can actually benefit plants by enabling them to produce more biomass with less water.

According to a study published recently in Nature Climate Change, the overall benefit of rising atmospheric carbon compensates for the negative effect of rising temperatures for wheat and soybean, and significantly mitigates those effects for rice and maize. The effects varied widely across regions and were particularly large in arid, temperate, and cold regions.

“Most people tended to think the beneficial effects of carbon would be quite minor and maybe it isn’t even something to think about,” says lead author Delphine Deryng. “But this analysis shows quite a big impact.”

But before anyone gets too excited, studies have shown that crops grown in higher carbon environments are less nutritious. Nutritional content was not included in this study, which analyzed crop yields, actual evapotranspiration (loss of water from plants to the air), and the ratio of the two, called crop water productivity.

Of course, there are still many unknowns. First, there was a lot of variability among the estimates from the six different agricultural models, indicating that plenty of uncertainty remains. What’s more, the projections were based on observational data on how plants react to increased carbon, collected from the few sites around the world running these experiments. These may not accurately represent how crops would behave in other regions and climates.

For Deryng, however, the paper provides farmers and policymakers a look at where and to what extent higher levels of carbon can be beneficial. And this is important knowledge to inform how we adapt to a hotter future.