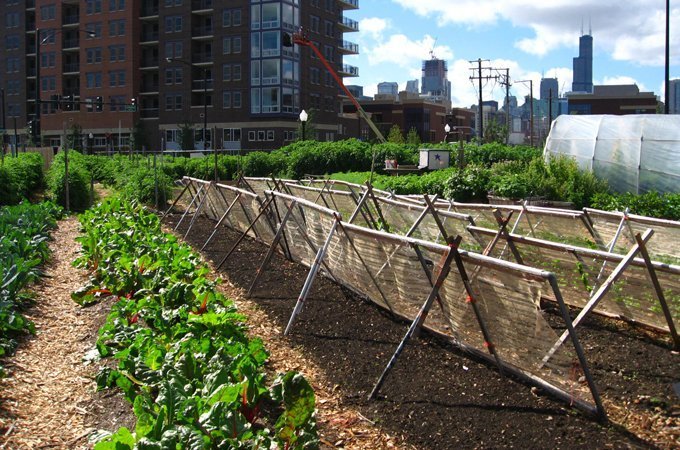 Urban gardens are diverse. But do they make cities greener?

In order to bolster the ecological value of city food gardens, researchers must first understand their cultural significance.
By Sarah DeWeerdt
April 12, 2016

These days there’s lots of interest in growing food in cities, mostly with the goals of reducing farm-to-fork distance and making fresh produce more accessible in ‘food desert’ areas. Few studies, especially in the United States, have explored what food gardens contribute to urban biodiversity and ecosystem services. Even fewer have addressed these questions in inner-city neighborhoods.

A new study conducted on Chicago’s south and west sides provides a first look at these issues, and also compares the characteristics of urban gardens across several ethnic groups. The results suggest that in order to bolster the ecological value of city food gardens, researchers must first understand their cultural significance.

In the study, researchers conducted anthropological interviews during the 2012 and 2014 growing seasons with 17 African-American, 23 Chinese-origin, and 19 Mexican-origin gardeners. They also mapped each participant’s garden, inventoried all the different types of plants growing there, and calculated the area devoted to each species.

Altogether, the gardens host a total of 123 different edible plants representing 102 species and 25 plant families, the researchers report in the journal Renewable Agriculture and Food Systems. These include 17 species of fruit, 27 species of herbs, and 79 kinds of vegetables.

The composition of a garden depends on the ethnicity of the gardener, the researchers found. Only Chinese-origin gardeners planted bitter melon, yardlong bean, winter melon, fuzzy melon, bok choy, and Chinese spinach. Okra and collards were unique to African-American gardens. And tomatillo and a culinary herb called pápalo were found only in plots tended by Mexican-origin gardeners.

These differences reflect the gardens’ cultural role. “I think, in some ways, especially for first generation immigrants to Chicago, it’s a way to bring a feeling of home,” says study team member Sarah Taylor Lovell, a landscape agroecologist at the University of Illinois.

Many of the Mexican-origin gardeners cultivated tropical corn, a striking plant that grows up to 3 meters tall and provides not just a source of food but a symbol: a highly visible marker of the gardener’s ethnic identity and cultural pride.

The researchers found that gardening practices also differ across ethnic groups. Fruit trees were most abundant in the gardens of Mexican-origin households. African-American gardeners planted the most ornamental species.

Many studies of urban ecosystems have assumed that backyards are mostly lawn, but none of the gardens tended by Chinese-origin gardeners included any lawn at all.

The interviews, which covered topics like the gardeners’ personal history, reasons for gardening, and gardening practices, also turned up some intriguing patterns and hypotheses that wouldn’t have been obvious just from surveying the gardens.

For example, both Chinese-origin and Mexican-origin gardeners said they got some of their seeds from their home countries. This suggests that immigrant gardens may help preserve agricultural biodiversity of home-country crops.

Because many gardeners save seeds from year to year and share or exchange them with other members of the community, they may even be shaping locally adapted varieties of these plants. In turn, this could in turn make the crops more resilient to climate change or other pressures.

When it comes to ecosystem services, the picture is more mixed. On one hand, the gardens in the study contain an impressive amount of plant diversity: a total of 387 species from 85 families, considering both edible and ornamental plantings. “The number of species grown across all of the gardens was comparable to the number of species found in a remnant native prairie near Chicago,” says Lovell.

“But the vast majority of garden species were not native to the region,” she says. Fewer than 10 percent of the plant species growing in the gardens are native to the area, and non-native plants may not be as beneficial to other species like birds and insects.

“Most of the gardeners were using synthetic fertilizers to really optimize production,” Lovell adds. “In doing so, they were increasing some nutrients to a level that could lead to runoff and contamination of surrounding environments.”

But Lovell and her colleagues think that the best way to encourage gardeners to make more environmentally friendly choices is to understand and honor why people garden, how they decide on garden practices, and what they value in the landscape. “Efforts to capitalize on these gardens as part of the green infrastructure of the city must recognize the different cultural and social roles they play for diverse urban populations,” the researchers write.