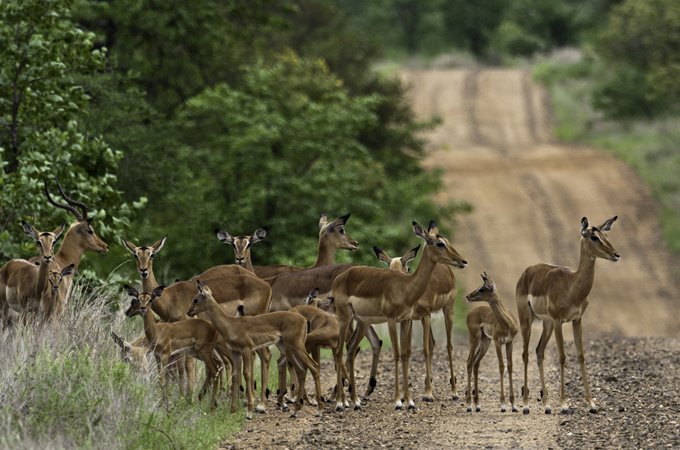 Wild animals avoid the roads that tourists use to see them

Most wildlife photographic tourism in Africa is conducted from vehicles on roads, and tourists aren’t likely to come if they can’t see wildlife from the safety of a car or truck.
By Jason G. Goldman
April 13, 2016

Impala are like the fun-sized candy bars of the African wildlife world. The small, tasty antelopes—that is, if you’re a lion, leopard, or hyena—are among the most common animals spotted while on safari, and it turns out that they’re not all that comfortable with our roads. And if impala avoid roads, then lions just might, too. Most wildlife photographic tourism in Africa is conducted from vehicles on roads, and tourists aren’t likely to come if they can’t see wildlife from the safety of a car or truck. So the very roads that enable tourism could ultimately keep some of it away.

It’s now well known that roads affect animals in a variety of ways. In some cases, they impose artificial boundaries on sub-populations of a species, preventing gene flow across a landscape as the animals avoid crossing roads or get hit while attempting to do so. In other cases, vehicles cause animals to shift their focus away from things like foraging or breeding. Or roads can make prey more likely to become someone else’s dinner; the sound of traffic may mask the sound of an advancing predator. Together, these processes can change animal movement and demographic patterns, and can sometimes be directly implicated in population declines.

What’s not yet entirely understood is whether different types of roads—paved and unpaved, for example—affect animal behavior in different ways. To find out, Margarita Mulero-Pázmány and colleagues went to Kruger National Park in South Africa. They published their results in the Journal of Zoology.

One of the largest reserves in the country, Kruger encompasses nearly 20,000 square kilometers and contains nearly 2,300 kilometers of roads, 850 of which are paved. Together, those roads host some 1.5 million drivers and passengers each year, many of which are tourists hoping to view wild animals.

For two months in 2014 at the boundary of the wet and dry seasons, the researchers drove up and down a set of six paved and six unpaved roads in Kruger between 8am and 5pm. In addition to measuring traffic intensity and the proximity of impala herds to the roads, they also noted whether the presence of a vehicle caused the impala to move further away from the road, and the distance at which the impala appeared to tolerate roads.

The researchers encountered impala far more frequently while driving unpaved roads, noting 7.7 observations per 10 kilometers, as opposed to 3.8 sightings per ten kilometers on paved ones. The impala were slightly more tolerant of vehicles on unpaved roads than paved ones, though they seemed habituated to the presence of vehicles in general. In only 23 out of 118 observations did the impala generate a flight response to an oncoming vehicle.

When the researchers modeled impala distribution in areas both with and without roads, they found that impala were statistically less likely to spend time within ten meters of a paved road. Despite having lots of experience with cars and roads—the first vehicle entered the park in 1927—the impala are still influenced by them, even if imperceptibly. If cars don’t send impala running away, they could still alter their behavior enough that the accumulated stress has negative repercussions on an individual’s—or the population’s—long-term health.

What’s not yet clear is whether the slight avoidance the impala show is due to the pavement itself or to the increased traffic on paved roads, which have roughly six times more cars per minute than unpaved roads, according to this study. In Kruger, most tourists stick to the paved roads. As visitors prefer seeing more wildlife, as closely as possible, the impala’s avoidance of paved roads could impact tourists’ enjoyment of the park and ultimately its revenue stream. “Managers of touristic protected areas have the difficult mission of keeping a sustainable balance between protecting biodiversity, satisfying visitors, and optimizing the profitability of the park,” writes Mulero-Pázmány.

As the wildlife tourism industry expands along with the road networks needed to sustain it, wildlife managers will be tasked with continuing to preserve the wildlife around which the industry is built, lest Africa’s few remaining wild places become little more than glorified zoos.