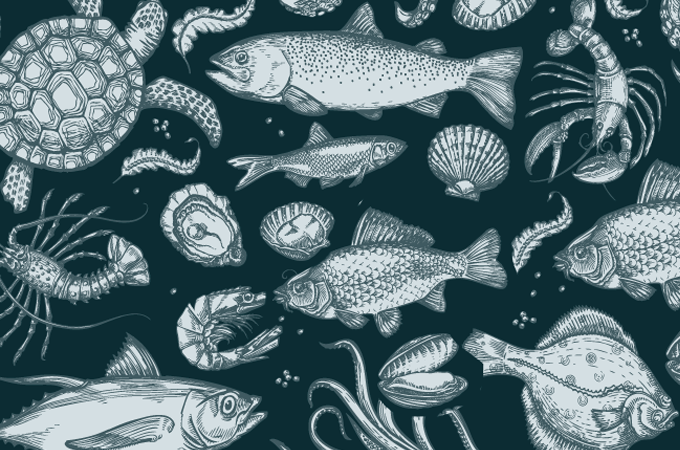 After water temperature, species diversity is the second strongest predictor of biomass. Human impacts follow closely after that.
By Jason G. Goldman
May 18, 2016

Despite our terrestrial nature, Homo sapiens has emerged to become the dominant predator on marine ecosystems worldwide. While we exert top-down control on fish biomass, physical conditions such as water temperature, along with the availability of solar energy and mineral nutrients, provide the foundation on which the ecosystems are built. These parameters are shifting thanks to anthropogenic climate change. So, taken together with our predatory tendencies, this means that our species is squeezing marine ecosystems from both sides, putting our piscine protein source at stake.

In theory, the more biodiverse an ecosystem is, the more biomass it will contain. That’s because each species adapts to a unique niche within the ecosystem. So the more species there are, the more effectively those niches are exploited, and the more animals overall. Hundreds of experiments support this idea, but they’ve all been conducted in laboratories.

An international team of researchers led by J. Emmett Duffy set out to investigate whether biodiversity predicts biomass in the wild as well, and just what that means for a future marked by climate change. To do it, they harnessed data collected by citizen scientist SCUBA divers in an effort called the Reef Life Survey, which relies upon recreational divers to monitor nearly 2,000 sites around the world.

The researchers found, as suspected, that water temperature is the main driver of reef fish biomass; warmer temperatures increase biomass, but temperature variability decreases it. They also found that sites with greater species richness and diversity also had higher biomass. In fact, following temperature, species diversity was the second strongest predictor of biomass. Human impacts followed closely after that, though it’s not clear whether fisheries exploitation alone influences biomass, or whether a combination of forces including coastal development and pollution is at work. To put it another way, the researchers say, “[the] data show that changing biodiversity is a major control on the globally important ecosystem service of reef fish biomass production, comparable to climate and human impacts.”

The link between increasing water temperatures and biomass is neither intuitive nor straightforward. Temperature controls biodiversity, and biodiversity predicts biomass. So changing climactic conditions ought to reorganize marine ecosystems. Indeed, researchers have already witnessed this occurring. But Duffy’s analysis showed that while changing temperatures did reduce reef fish biomass, the effect was halved in the most diverse ecosystems. That’s “possibly because species-rich communities harbor fishes with a range in thermal niches,” he writes. More biodiverse ecosystems are simply more likely to include fish species able to withstand the coming changes.

The study underscores the fact that conserving individually important species is not enough. Instead, the primary target of marine conservation should be biodiversity. Indeed, the researchers concluded, “biodiversity is equally and often more important than water quality, nutrient supply, and human influence in controlling the global distribution of reef fish biomass.” Conservation efforts that have biodiversity as a goal will therefore be best able to ensure the continued availability of fish as a key source of human nutrition.