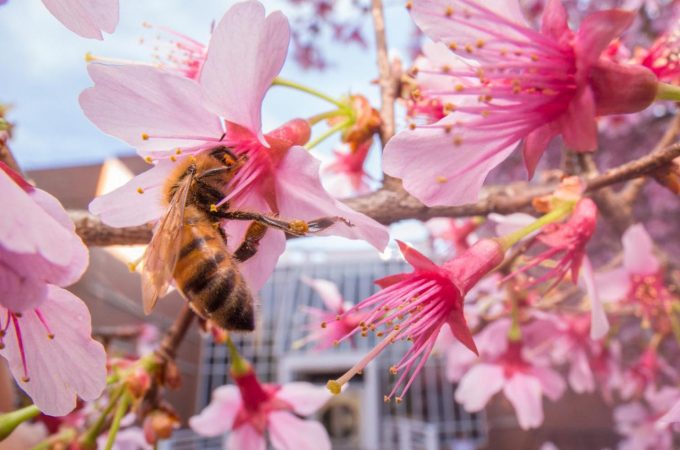 City bees don’t get their buzz from junk food

Processed sugars make up a surprisingly small proportion of the diets of urban honeybees, suggesting many cities contain enough flowers to feed pollinators.
By Sarah DeWeerdt
May 24, 2016

Shooing bees away from a can of soda or a cup of fruit punch is a frustration familiar to just about anyone who has picnicked in a city park. But these processed sugars make up a surprisingly small proportion of the diets of urban honeybees, according to research published last week.

Researchers from North Carolina State University sampled honeybees from 39 hives located across a gradient of rural and urban habitats within 30 miles of Raleigh, North Carolina. Of the hives, 15 were feral and 24 were managed by small-scale, non-migratory beekeepers.

The researchers analyzed the carbon atoms in the bodies of worker bees from different hives. Plants like sugarcane and corn contain a high proportion of an isotope, or form, of carbon known as carbon-13. So bees feeding on lots of human food containing processed sugar and corn syrup should have a higher proportion of carbon-13 in their bodies compared to bees feeding primarily on flower nectar.

Previous studies have established that this isotope signature is a good marker of human food consumption by urban animals, and that other wildlife species such as foxes and ants do take advantage of human food sources in urban areas.

“We wanted to know if there are even enough flowers in urban areas to support bee populations, or if bees are turning to human sugar sources, like old soda,” says Clint Penick, a postdoctoral researcher at NC State and the study’s lead author.

Surprisingly, though, bees from more urbanized sites don’t have more carbon-13 in their bodies than bees from rural areas, the researchers report in the Journal of Urban Ecology. “Basically, bees are relying on flowers in cities and are not turning to human foods to supplement their diet,” even in the most built-up areas of Raleigh, Penick says.

Urban bees may rely less on human food sources than ants because they can forage over greater distances and fly across barriers such as roads to get to the food they like the best, the researchers suspect.

However, bees from managed hives in both urban and rural habitats have higher levels of carbon-13 compared to those from feral colonies. This is probably because beekeepers often provide sugar water to their bees after harvesting honey or during seasons when natural sources of nectar are scarce. It’s not yet clear whether this dietary shift has health consequences for bees in managed hives, the researchers say.

Another open question is whether the study’s findings apply to all cities. Raleigh, North Carolina is a medium-sized city, with a fair amount of green and open space. Bees might have more trouble surviving on natural food sources in denser metropolises like New York and Tokyo. For now, though, the findings are a hopeful sign that many cities contain enough flowers to sustain pollinators – and argue for planting even more.

Header image: A honeybee forages among the flowers of an urban tree. Credit: Lauren Nichols.