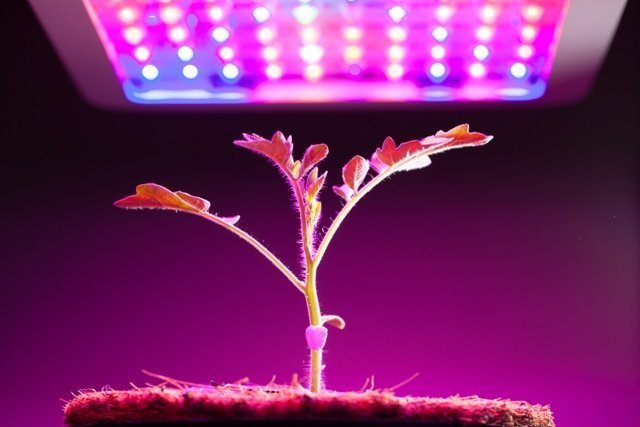 Is this the way to make indoor farming cheaper and more sustainable?

Researchers test a biofeedback system which monitors photosynthesis in the plant and automatically adjusts light levels according to the plants' needs.
By Catherine Elton
May 20, 2016

Indoor agriculture is gaining in popularity, and there are high expectations that—at a large enough scale—it could help satisfy the growing demand for food. But whether indoor farms, often called vertical farms or plant factories, make economic or environmental sense is hotly debated.

While indoor farms save land and water and use fertilizer more efficiently—all with little to no natural light—they consume lots of electricity to power lights and air conditioners to compensate for the heat all those lights generate. But what if farmers could reduce the amount of light they use and still grow their plants?

That is the goal of a recently developed biofeedback system which monitors photosynthesis in the plant and automatically adjusts light levels according to the plants’ needs. A study demonstrating the system’s effectiveness was published recently in the Journal of the American Society of Horticultural Science.

For the study, researchers placed lettuce, sweet potato, and the house plant pothos, which all require different levels of light, in a growth chamber with LED lighting and connected them to a chlorophyll fluorometer. A datalogger used the data collected on the fluorometer to calculate the Electron Transfer Rate (ETR), which is a proxy for photosynthesis. The datalogger then sent a signal to the lighting control board, which adjusted the photosynthetic photon flux density of the lights—essentially turning them up or down—depending upon whether the plants are above or below a predetermined target ETR. The study demonstrated that the system was able to maintain a wide range of ETR values. According to the authors, a system like this could be programmed with an algorithm that takes into account different electricity prices at different hours of the day to maximize ETR when electricity prices are lower.

According to van Iersel, a professor of horticulture at the University of Georgia, while this study was essentially a proof of concept, he and his team are already planning to take this research to the next level. Future experiments will measure how plants perform over the long run under different light levels and how growers can optimize those light levels to reduce electricity usage and costs.

This technology could also be used in greenhouses, which often supplement with artificial light, says van Iersel. That means that the system could be useful even if vertical farms don’t catch on in a big way.