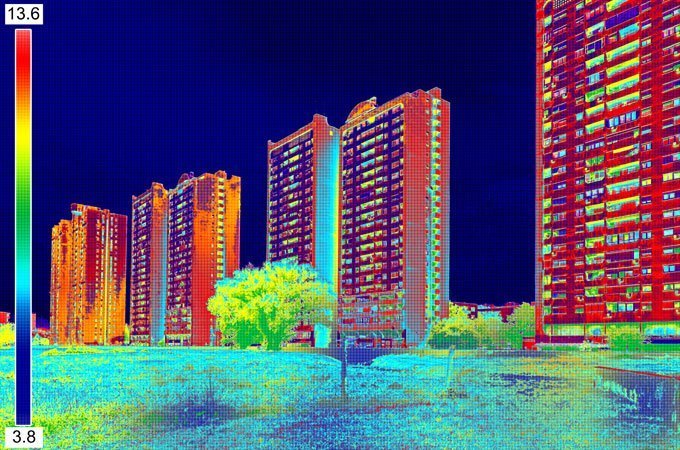 Researchers have documented a "park cool island" effect that partly offsets the "urban heat island" effect and could be a boon for urban wildlife.
By Sarah DeWeerdt
May 31, 2016

Around the world, cities tend to be warmer than nearby rural areas, mainly because of the way pavement and buildings absorb and retain heat. Due to this “urban heat island” effect, spring also comes earlier to cities, with urban plants in bud and bloom before plants in less built-up areas.

But green space within a city may help to mitigate these changes, according to a study published earlier this month in Environmental Research Letters. Researchers at the University of Wisconsin-Madison conducted the first fine-scale exploration of how the urban heat island effect influences plant growth at different locations within a city.

The researchers analyzed data collected in 2012 through 2014 from a network of 151 temperature sensors deployed in and around Madison, Wisconsin. They used these temperature data to define the start and end of the growing season for each sensor location in each year.

Not surprisingly, spring comes earlier and summer ends later in urban areas, they found. The growing season is about 5 days longer at urban temperature sensors compared to rural ones.

These changes are linked to the percentage of impervious surface around each sensor: the more pavement, the larger the heat island effect. In the most densely built-up areas of Madison, the growing season is 8 to 10.5 days longer than it is at rural sites.

Intriguingly, however, the length of the growing season in Madison’s city parks is somewhere between that of concrete jungle and bucolic farmland. This suggests the existence of a “park cool island” effect that partially offsets the urban heat island effect. On net, Madison’s parks have a growing season 1.7 to 3.2 days longer than nearby rural areas, the researchers found.

Changes in the timing of plant growth can have cascading ecological effects on insect and bird life, as species that depend on each other become increasingly out of sync. But parks might provide a refuge where urban species find temperature and seasonality conditions more like those to which they are adapted. And this role could become even more important as the urban heat island effect is compounded by earlier springtime due to global climate change.

“With a better understanding of the impacts of urbanization on vegetation, we can create more sustainable cities that behave more similarly to the natural areas they have replaced,” says Samuel Zipper, lead author of the study and a postdoctoral researcher at the University of Wisconsin-Madison. “Every little bit of greenness counts within a city.”