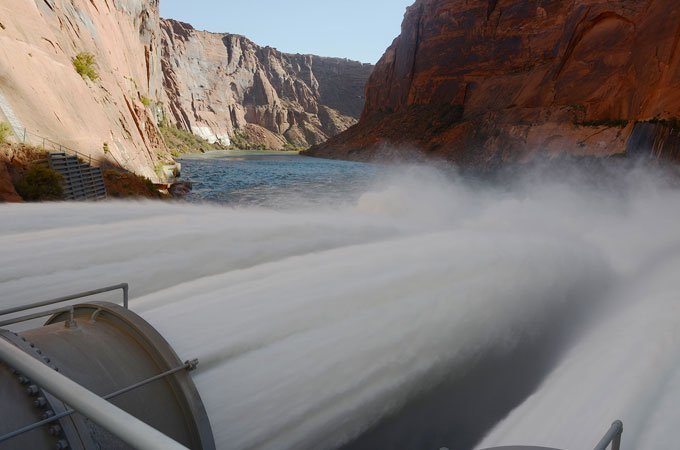 Hydropeaking, the practice of varying river flows below a dam depending on electricity demand, causes major problems for aquatic insects.
By Sarah DeWeerdt
May 10, 2016

Scientists know that hydropower dams often decrease the abundance and diversity of aquatic insects downstream. But until now it wasn’t clear why—after all, dams cause a range of environmental stressors such as alterations in water flow, temperature, and sedimentation.

A massive new study led by the U.S. Geological Survey lays much of the blame on hydropeaking, the practice of varying river flows below a dam depending on electricity demand. Because of hydropeaking, the amount of water released from a dam can vary by as much as ten-fold throughout the day, creating an artificial intertidal zone that propagates for hundreds of kilometers downstream.

The hour-by-hour variation in water levels is a major problem for aquatic insects, which are a key element of river food webs and important prey for fish, birds, bats, and other wildlife, researchers reported last week in the journal BioScience. But lowering river flows during times of peak egg-laying and low electricity demand could give those insects a boost.

Consulting a database of insect life-history traits, the researchers determined that more than three-quarters of aquatic insects lay their eggs in shallow water at the river’s edge or by cementing eggs to the undersides of partially submerged rocks. These species could be vulnerable to hydropeaking, they reasoned, because eggs laid during high river flows are likely to be exposed to the air once the hydropeaking tide passes.

To follow up on this hunch, the researchers collected mayfly and caddisfly eggs from the Green River in Utah and exposed them to varying periods out of the water. Indeed, even an hour of desiccation was enough to kill most of the eggs, they found.

And to see how this all operates on a real river, the scientists selected a 400-kilometer stretch of the Colorado River in the Grand Canyon, downstream of the Glen Canyon Dam. Since the Grand Canyon is remote and difficult to access, they turned the project into a huge citizen-science effort, recruiting participants on rafting tours to collect more than 2,500 aquatic insect samples over the course of three years.

Microcaddisflies, which lay their eggs along the river’s edge, were rare in the Grand Canyon, the researchers found. Most of the microcaddisflies collected in the study were probably from nearby tributaries, not the main stem of the river.

Read more:  Could artificial indoor lights power up our devices?

In fact, scientists have been puzzled for decades by the fact that mayflies, stoneflies, and caddisflies are virtually absent from the Colorado River downstream of the Hoover and Glen Canyon Dams, but rich and abundant upriver. The new study explains why: all those insects are river’s-edge egg layers, and have likely been extirpated from the river due to hydropeaking.

The researchers also found that blackflies, which lay their eggs in open water and therefore would be expected to be relatively unaffected by hydropeaking, were present throughout the Grand Canyon.

Midges, which have an intermediate egg-laying strategy—sometimes cementing eggs to rocks and other times broadcasting them in open water—showed a telling pattern. These insects were common in stretches of the river where the hydropeaking “low tide” occurs at dusk, synchronized with egg laying. But they were much rarer in spots where the high water occurs at dusk, and where they would be apt to lay eggs in locations that would later be exposed.

Finally, the researchers took a broader view by analyzing daily river flow data and insect surveys across 16 dammed river stretches in the western U.S. They found that rivers where lots of hydropeaking occurs have a dearth of aquatic insects, while rivers with little hydropeaking have more insect diversity.

Hydropeaking isn’t the only negative effect of dams, the researchers caution. But the results suggest that dams themselves aren’t entirely incompatible with healthy aquatic insect populations. Instead, it depends on how water flows are managed.

“These results may help resource managers improve river health while still meeting societal needs for renewable hydroelectricity,” says Ted Kennedy, USGS scientist and lead author of the study. For example, managers could release consistent, low river flows on weekends during peak egg laying periods. This would cause little disruption to the power grid, since electricity demand is relatively low on weekends, but ensure that eggs laid during that period would never dry out.