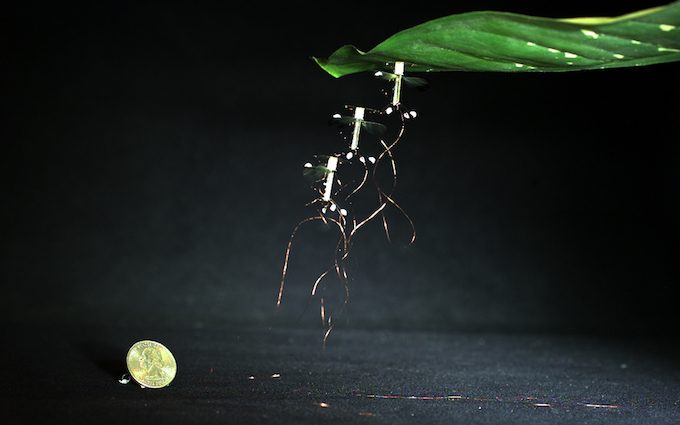 This flying insect-sized robot weighs just 100 grams and, inspired by real-life insects, can perch on just about any surface.
By Jason G. Goldman
May 25, 2016

Drones have become ubiquitous, and apart from taking stunning videos, are poised to help with everything from disaster recovery to public health. The problem is that the constraints of battery power and mechanical fatigue result in highly limited flight time. Bigger batteries might help solve the problem, but bigger batteries are heavier. To look for alternative solutions, Harvard engineer Moritz Graule and his colleagues looked to the natural world.

Plenty of flying critters, from birds to bats to bees, manage to fly about without completely running out of steam, and the reason they can do it is that they perch rather than hover, as most drones do. Flying critters can perch upside down, like bats, or on the wall, like flies. They can rest on leaves, flowers, branches, rocks, or even on other creatures.

But flying animals and insects have a wealth of tools at their disposal for adhering to and then releasing their perches, such as hair-like barbs, talons, or gluey adhesives. Bird-sized aerial robots have had some success using spring-loaded needles and the like to latch on to a surface, but these approaches aren’t feasible for insect-sized bots. While they are more agile in flight than larger robots, they simply can’t accommodate the mechanics necessary to operate mechanical grabbers and grippers.

When the researchers eventually settled on was an electrostatic adhesive. “Electroadhesion” wouldn’t typically be strong enough to allow a bird-sized robot to perch, but is sufficient for one the size of a bug. To help cushion the the robot as it makes contact with a hard surface, they attached the electric apparatus to a small piece of foam.

Running the electrode while perched requires a thousand times less power than a hovering drone uses. “When making robots the size of insects, simplicity and low power are always key constraints,” said Harvard professor Robert Wood, who oversaw the study, in a statement. “The use of adhesives that are controllable without complex physical mechanisms, are low power, and can adhere to a large array of surfaces is perfect for robots that are agile yet have limited payload.”

Aerial robots like this could provide bird’s-eye views of disaster areas, detect biological or chemical hazards, or serve as a temporary telecommunications network.

The electrode that supplies the electricity weights just 13.4 mg, which brings the weight of the entire flying robot to just 100 mg, roughly equivalent to an actual bee. By approaching any surface—a window, a tree, or even a leaf—and switching on the electricity, the tiny robot can perch. To detach, the electrical supply is just switched off.

The researchers call it the “RoboBee.”

Header image: The RoboBee clinging to a leaf, via Harvard Microrobotics Lab/Harvard University.