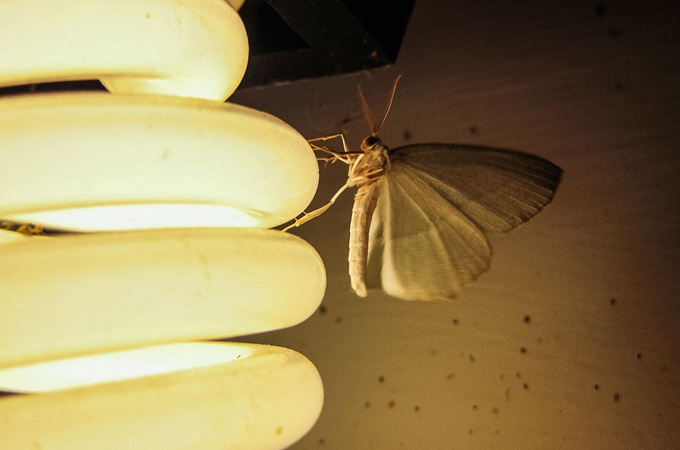 Distracted while pollinating: The hidden danger of artificial light

Moths drawn to artificial sources of light may do less work pollinating plants, according to the first study of the effect of streetlights on moth behavior.
By Sarah DeWeerdt
June 7, 2016

Everyone knows moths are attracted to light, but scientists are just now learning that this attraction may have negative consequences for other parts of the ecosystem. Moths drawn to artificial sources of light may do less work pollinating plants, according to research published last week in the journal Global Change Biology.

Researchers sampled moths at 40 sites along hedgerows bordering agricultural fields in Oxfordshire, England. Half of the study sites were lit with streetlights and half were not. Surprisingly, no one had previously investigated how this very common source of artificial lighting affects the behavior and ecological function of moths.

They used three different methods to sample the moth community at each site: by capturing moths along 25-meter-long transects at night; by shining a bright flashlight vertically and counting the moths that flew through the beam over the course of a minute; and by setting out light traps, which provide a light source and capture moths attracted to it.

Light traps are a standard method for sampling moths, but the researchers argue, logically, that it doesn’t make much sense to study the effects of artificial lighting with light traps. And indeed, the light traps detected fewer differences between lit and unlit sites than transects did.

Still, the three methods together yielded a clear picture. “Moth abundance at ground level was halved at lit sites, species richness was >25% lower, and flight activity at the level of the light was 70% greater,” the researchers write. In other words, at lit sites more moths are flying up high, around streetlight level. At dark sites more moths are flying low, near the plants.

“Where there are street lights, our research indicates that the moths are being attracted upwards, away from the fields and hedgerows,” says lead author Callum Macgregor, a graduate student at Newcastle University. “This is likely to cause disruption of night-time pollination by moths, which could be serious for the flowers which rely upon moths for pollination, and of course there could be negative effects on the moths themselves as well.”

To explore whether this altered moth behavior affects pollination, the researchers analyzed the abundance and diversity of pollen on the proboscides of the captured moths.

About a quarter of all moths collected were carrying pollen. These moths represented 83 species and 10 families, and only 1% of the individual pollen-carrying moths belonged to the family (Sphingidae) most associated with pollination. The pollen came from at least 28 different types of flowers, including several not previously known to be moth-pollinated. All this contributes to mounting evidence that moths make a more significant contribution to pollination than previously assumed.

But the data also suggest that overall, pollen transport by moths is lower at lit sites compared to unlit sites. In the light-trap samples there were fewer moths carrying pollen at lit sites, and in the transect samples fewer pollen types were found on moths at lit sites.

More research would be required to confirm that this reduced pollen transport corresponds to reduced pollination services. Still, the findings are worrisome, the researchers say.

“There is a great deal of concern at the moment about our falling pollinator populations and the knock-on effect on plant pollination,” says study team member Darren Evans, a reader in ecology and conservation at Newcastle University. “Our research suggests that it’s a process that is being damaged on two fronts – night and day – and together the impact could be significant.”