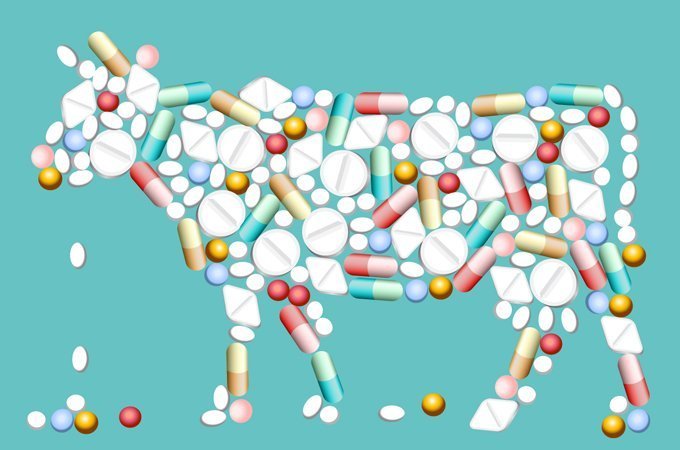 A recent study has documented for the first time that antibiotics given to cows also increase the emissions of the greenhouse gas methane from cow dung.
By Catherine Elton
June 3, 2016

Antibiotic use and overuse in livestock has long been controversial, as it has been linked to antibiotic resistance in humans. Livestock are regularly given antibiotics to keep them healthy in overcrowded or unsanitary conditions, or even to boost their growth.

Now, a study published recently in the Proceedings of the Royal Society B has documented for the first time that antibiotics given to cows also increase the emissions of the greenhouse gas methane from cow dung.

“Antibiotics have effects on the natural ecosystem well beyond what we knew they had before,” said senior author Tomas Roslin. “The increase of methane from the dung of treated cows was fairly striking; it was almost double.”

Previous research has shown that the presence of dung beetles in cow patties decreases the amount of methane that is released into the environment. The researchers hypothesized that antibiotics could affect beetles, which in turn would affect their ability to reduce methane. To test this hypothesis, they treated five cows with a 3-day course of a broad spectrum antibiotic and included five control cows. They collected dung from all of the cows on a single day. They separated the dung from each cow into six sections and placed dung beetles into four of the six samples from each cow. Then they analyzed the dung beetles, the beetles’ microbiota, and the emissions from the cow patties.

They found that dung from treated cows emitted 1.8 times more methane than controls. Surprisingly, however, the increase was not mediated by beetle activity. In fact, while antibiotic treatment changed the dung beetle microbiota, it did not affect their size, survival, or reproduction. What’s more, methane increased in treated patties with and without beetle presence. This leads the researchers to believe that the increase in emissions from treated cows has to do with the way antibiotics affect the ability of cow microbiota to keep methane-producing bacteria in check.

This new hypothesis is fueling the researcher’s next line of antibiotic research, focusing on cow burps. Roslin notes that it is important to remember that cow dung is a relatively small source of cow methane emissions, so any increase in these emissions will also be small. The primary way cows emit methane is by belching.

“It seems that messing with the microbes inside the cows affects droppings on the back end,” says Roslin. “So it will be very exciting to know if it’s affecting methane emissions from front end, which are larger.”