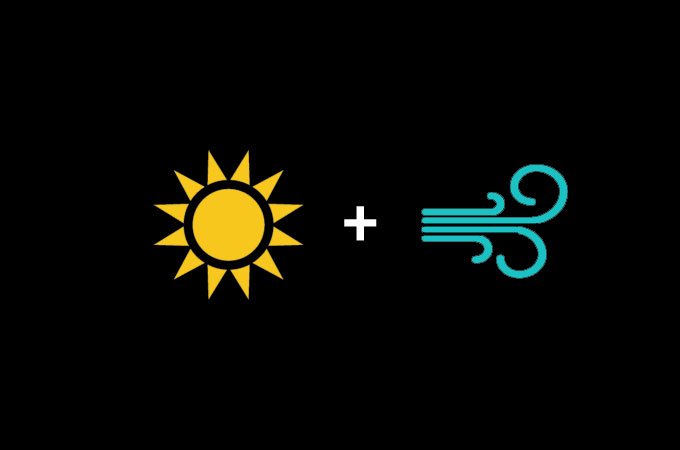 Who needs turbines? This flat device captures energy from wind and sun

A new device can be installed on rooftops, offering a way to capture large amounts of wasted energy in cities, say researchers.
By Prachi Patel
June 2, 2016

From panels and thin-film laminates to spray paint, scientists have come up with several solar power technologies that can be plastered on houses and buildings. Not so wind. Conventional wind turbines have to be installed in remote areas given their large volumes and safety issues.

Now researchers have come up with a flat device that can harvest energy from the sun and wind at the same time. While large solar wind energy towers have been designed for use in hot, dry desert environments, this new device can be installed on rooftops, offering a way to capture “the large amounts of wasted wind energy in city,” say the researchers in a report published in the journal ACS Nano. And it’s an ideal solution for generating electricity during the day and at night.

The device could be a sustainable way to power smart cities of the future, the researchers say. Cities are expected to get smarter with the Internet of Things, a term for the connected network of sensors and electronics that are increasingly embedded in computing devices, household objects, vehicles, and buildings. Powering these intelligent devices will take a lot of energy. Ideally, that energy can come from renewable sources.

The new hybrid device is a combination of a solar cell and a nanogenerator. The nanogenerator is based on the triboelectric effect, the same phenomenon behind static electricity. In this effect, when two different material surfaces repeatedly touch each other, electrons move from one surface to another, building up charges that allow an electric current to flow.

Nanotechnologist Ya Yang of the Chinese Academy of Sciences, materials scientist Zhong Lin Wang of the Georgia Institute of Technology, and their colleagues made the wind-harvesting nanogenerator with sheets of two different kinds of plastic separated by air. Wind blowing on it vibrates the sheets, which generates electricity. They fixed solar cells on top of the device.

Tests of the 120 mm x 22 mm x 4 mm device showed that it could generate 8 milliwatts of solar power and up to 26 mW of wind power; 1mW is enough to light up about 100 small LEDs. To demonstrate its use, the research team installed four of the devices on a model home’s roof and exposed it to simulated sun and wind conditions in the lab. The device lit up LEDs in the house and charged a lithium-ion battery that powered a temperature and humidity sensor.

“Large-scale installation of the hybridized nanogenerators on the roofs of the city buildings can maximize solar and wind energies scavenging in city environments for realizing some self-powered functions in a smart city,” the researchers say.