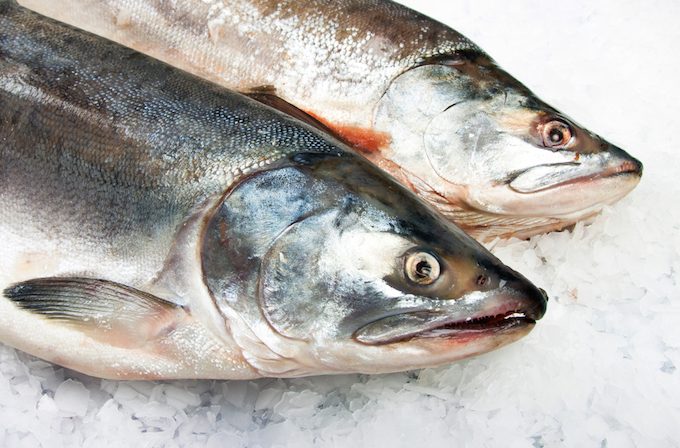 Half of the world’s farmed fish could have hearing loss

More than 66 million metric tons of fish are farmed each year, and perhaps half of those fish have inner ear deformities that result in hearing loss.
By Jason G. Goldman
June 8, 2016

Most humans live near the sea and, as a result, have come to rely upon seafood as their main source of protein. As a result of that, many of the world’s fisheries, especially those near shore, have been overfished. One potential means of providing people around the world with sufficient nutrition while also protecting the world’s wild fish stocks is fish farming. Aquaculture, the world’s fastest growing means of food production, is currently responsible for producing more than 66 million metric tons of seafood each year. Similar farming systems are also used to restock depleted ecosystems for conservation purposes. But like terrestrial farming, aquaculture is not without its animal welfare concerns. Indeed, new research finds that perhaps half of the world’s farmed fish suffering from hearing impairments.

Otoliths are small structures made of calcium carbonate that can be found inside the ears of all vertebrates. The sensory organs are critical not just for hearing, but also for maintaining balance and for sensing gravity and acceleration. While researchers often study the otoliths of wild fish, as they provide a handy way of assessing a fish’s age, that’s not necessary for their farmed counterparts. While some studies had documented that farmed fish had slight differences in the formation of their otoliths, nobody ever conducted a proper comparison between wild and farmed fish.

That’s where University of Melbourne graduate student Tormey Reimer comes in. Together with her colleagues, she studied wild and farmed Atlantic salmon in Norway, the world’s most important producer of farmed salmon. The team discovered that hatchery-raised fish were ten times more likely to have otolith deformities than wild ones. And the pattern isn’t limited to Norway. The researchers observed similar patterns among salmon in Australia, Scotland, Canada, and Chile. The deformities, they found, are already present in young fish, and the impairment only becomes more severe as the fish age.

In addition, the researchers used statistical models to infer how the otolith deformities would impact fish hearing. Those models suggested that affected fish could lose up to half of their hearing sensitivity, both in the audible and infrasound ranges.

The findings raise important questions about the welfare of farmed fish. More than two million metric tons of salmon are farmed each year, with more than a billion individual fish harvested. In most places, animal welfare guidelines are organized around the so-called “five freedoms,” which specify that animals ought to live free of discomfort, pain, injury, disease, and fear, and that animals ought to be free to exhibit normal behaviors. The deformities—and their associated impairments—described by Reimer and her team can lead to pain, injury, and disease. And for species that communicate acoustically, the impairments also affect fish’s ability to behave naturally.

In addition to identifying ways to improve the lives of the animals we raise in aquaculture, further research could potentially reveal whether hearing impairments can help explain why farmed fish are less able to evade predators and less likely to survive their release, and why such conservation efforts fail.