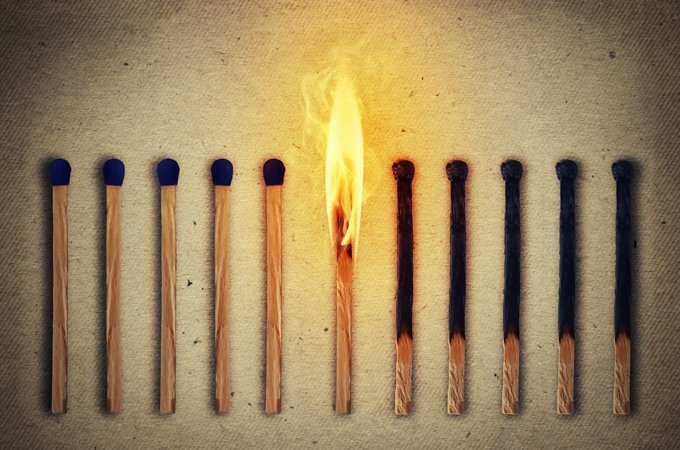 It's thought that insect outbreaks lead to more severe wildfires, but new research suggests that the opposite is true.
By Jason G. Goldman
June 1, 2016

When it comes to forest management, conventional knowledge holds that insect outbreaks increase the risk of and damage from wildfires. The logic is that these insects increase the amount of fuel for a fire because they kill so many trees. The 2014 US Farm Bill even designated $200 million each year for wildfire prevention measures across 18 million hectares (100 hectares = 1 square kilometer) based upon this assumption. There’s just one problem: that assumption may not rest upon a foundation of solid science.

“Recent studies indicate that insect outbreaks generally do not increase wildfire likelihood, [and] key uncertainties remain regarding the influence of insect outbreaks on subsequent wildfire severity,” writes Garrett W. Meigs of Oregon State University’s College of Forestry. Together with researchers from OSU and the University of Vermont, Meigs decided to take a fresh look at the question of insects’ impact on wildfire severity by looking at large 81 fires in the US Pacific Northwest that occurred between 1987 and 2011. Each of those fires burned a minimum of 400 hectares and had substantial geographic overlap with prior outbreaks of either the mountain pine beetle or the western spruce budworm.

The bark beetles, which have infested tens of millions of hectares across North American forests, aren’t invasives. They are native to North American forests, but recent environmental changes have led to serious outbreaks and millions of dollars of damage. Adults of the species attack pine tree trunks (they particularly love lodgepole pines), often resulting in the trees’ death. The western spruce budworm, on the other hand, does its damage in the larval phase, when the bugs gobble up all the foliage of their host trees, which include firs, spruces, and Douglas firs. While a tree can withstand the budworms in any single season, multiple years of defoliation by the larvae can kill a tree, or make it more susceptible to mortality from the aforementioned bark beetles.

What’s not yet clear is how insect outbreaks reduce the severity of wildfires, but the researchers have at least one guess. In killing or defoliating the trees, the insects are moving the fuel along both horizontal and vertical gradients, both by thinning the forests and by moving biomass from the canopies to the ground. This movement may alter forest connectivity enough that fires could have a harder time spreading.

Further, the insects’ effects on wildfire severity had different long-term trajectories. Forests impacted by the mountain pine beetle enjoyed the reduction in severity over many years, with burn severity continuing to decrease even after two decades. The effects of the western spruce budworm were shorter-lived, however. After an initial decrease in burn severity, it slowly rose over time. By 20 years, the forest was back to its pre-outbreak baseline.

The researchers highlight the importance of further research to better understand this surprising pattern. It’s a critical area of research, especially given how much money is spent each year on fire mitigation and prevention, and given how fire regimes are expected to change in the near future due to the combined effects of climate change vis-à-vis warming, drought, and species invasions, and of anthropogenic activities like deforestation and livestock grazing.