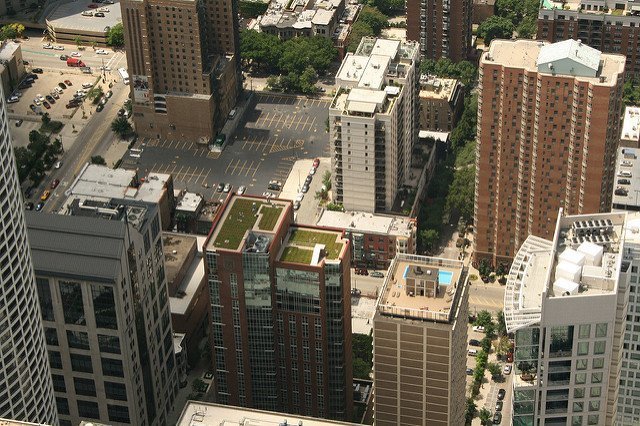 When sunlight hits a conventional roof, most of its energy is transformed into heat, warming the surface of the roof and the air above. This process is a major contributor to the urban heat island effect, which tends to make cities several degrees warmer than surrounding rural areas.

But light-colored “cool roofs” that reflect sunlight and “green roofs” planted with vegetation could substantially reduce the urban heat island effect, according to a study published this month in Environmental Research Letters. And that could be especially beneficial during the dangerous summer heat waves that are predicted to increase over the next century.

In the new study, researchers used a regional climate model to find out how cool roofs and green roofs would affect city temperatures during an August heat wave in Chicago, Illinois. First they recorded temperature data from buildings on the DePaul University campus during one such heat wave to confirm that the model does a good job of capturing conditions on real rooftops, whether green, cool, or conventional. Then they ran the model to calculate the effects of blanketing the city with green roofs or cool roofs.

Either green roofs or cool roofs could substantially reduce urban heat island effects by lowering roof temperatures by 3 to 4 degrees Celsius, the researchers found. Cool roofs are slightly better at bringing down the temperature and are often cheaper to install and maintain. But the plants on green roofs provide habitat and can also remove air pollutants from the atmosphere.

“The lessons learned from this research will be integral for city planners as they decide how green infrastructure should be implemented,” says lead author Ashish Sharma, a postdoctoral researcher at the University of Notre Dame.

Green roofs may have the greatest benefit in the most densely built-up areas, a finding that could help planners target the most promising locations for installing such roofs. For example, as little as 25% green roof coverage could reduce urban heat island effects by up to 2 degrees Celsius in the city’s most built-up commercial areas. If all the roofs in these areas were green roofs, the temperature would be reduced by 8.3 degrees Celsius.

But these sustainable technologies may also have unforeseen effects. The model shows that by reducing the temperature difference between the city of Chicago and Lake Michigan adjacent to it, both green roofs and cool roofs would also diminish the cooling lake breeze. This could also lead to stagnant air in the city and greater health impacts from air pollution.

On the other hand, the researchers say, plants on green roofs could help mitigate these effects by absorbing pollutants, a possibility that they intend to explore in their next round of simulations.