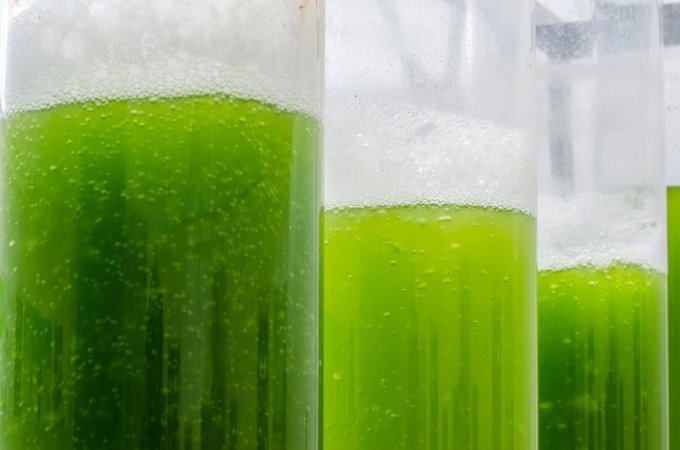 A sustainable superfood for farmed fish

Microalgae, which are rich in marine omegas, can be produced more sustainably than fish or vegetable oil. And tilapia grow well on them.
By Catherine Elton
June 16, 2016

Aquaculture could play a key role in sustainably feeding our growing planet. The problem is that when it comes to feeding the fish, it seems hard to hit the mark on sustainability. Fish oil and fishmeal are draining the oceans of ecologically important forage fish. But when the aquaculture industry substitutes these marine-based foods with vegetable oils and grains, they are driving an enormous amount of additional farming, with all its attendant impacts on the environment. What’s more, this vegetarian diet produces fish that are lacking in the marine omegas that are so important for human health.

Now, however, research published in the journal PLOS One appears to have found what could be a sustainable solution to the oil conundrum: marine microalgae. According to the researchers, these tiny, single-celled algae, which are rich in marine omegas, can be produced more sustainably than fish or vegetable oil. And, the study shows, tilapia grow well on them.

“It is clear that the growth of the aquaculture industry could be hampered by a lack of sustainable ingredients because it relies so heavily on fish oil or on oils that come from farming,” says lead author Pallab Sarker. “This study provides the evidence that we can substitute marine microalgae for all the fish oil used to feed fish.”

For the study, researchers divided 600 Nile tilapia into one of five groups: a control group that ate 100 percent fish oil and four groups that ate a diet in which either 25, 50, 75 or 100 percent of the fish oil was substituted with Schizochytrium Sp., a kind of microalgae. After 84 days, the fish were analyzed for weight gain, feed conversion ratios, growth rate, protein efficiency ratios, and survival rate. They also assessed the nutritional content of whole fish and fillets.

It is important to note that in this experiment the fish were raised only through the juvenile stage, not to market size. In the future, Sarker, a research assistant professor at Dartmouth, plans to run a longer experiment so that fish reach market size. He also plans to run experiments with river trout, different kinds of microalgae, and substituting fishmeal with microalgae.

Microalgae are produced in artificial ponds and are currently used for biofuel and nutraceuticals. What could pose the biggest obstacle to its uptake as fish feed, says Sarker, is cost. Sarker would not give specifics on prices, as he has not yet performed an economic analysis, but he did say that microalgae production is “expensive.” That’s why another line of his future research will be to use organic waste streams—including those from aquaculture itself—instead of traditional, inorganic inputs to produce microalgae. This would not only bring costs down, he says, but make this fish oil substitute even more environmentally friendly.