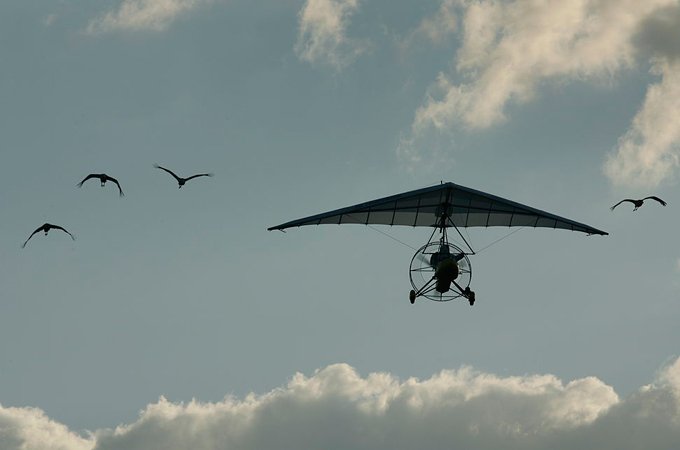 Among whooping cranes now returning from extinction’s brink, cultural innovation is led not by young birds, but by old ones.
By Brandon Keim
September 28, 2016

Evolution is usually considered in purely biological terms. Yet in animals as well as humans, it can be cultural, too. And among whooping cranes now returning from extinction’s brink, cultural innovation is led not by young birds, but by old ones.

Teitelbaum is the lead author of a new study, published in Nature Communications, on a population of cranes whose original members were bred in captivity and introduced to the wild in 2001. They learned their initial migration routes from researchers flying beside them in ultralight aircraft; since then the cranes have charted their own courses, with many opting to winter in more northerly sites that shorten the total distance flown during migration.

Called “shortstopping,” this shift reduces the energy required to migrate. As of 2006, none of the cranes shortstopped. By 2015, three-quarters of them did, with average migration distance shrinking from more than 1,000 miles to roughly 500 miles. So rapid a change is clearly not genetic in origin, but rather a change in behavior passed between groups through learning rather than reproduction.

Moreover, older birds were the first to use shortstopping sites; for each group of cranes within this new population, migration distance dropped by about 25 miles per year of the oldest crane’s age. It was these individuals, experienced and canny, with an accumulated knowledge of landscape and season, who led the way.

“Older individuals might have more to contribute than previously thought,” says Teitelbaum—a fun counterpoint to the stereotype of innovation as the province of youth, and a potentially important lesson for understanding not just cranes but any long-lived social species.

A human-dominated world is often an inhospitable one, with land use and climate change posing new difficulties. Yet some creatures can adapt quickly by changing their behavior. To help animals thrive in a fast-changing world, then, people should think not just of populations and reproduction rates, but of age and experience and the wisdom of elders.