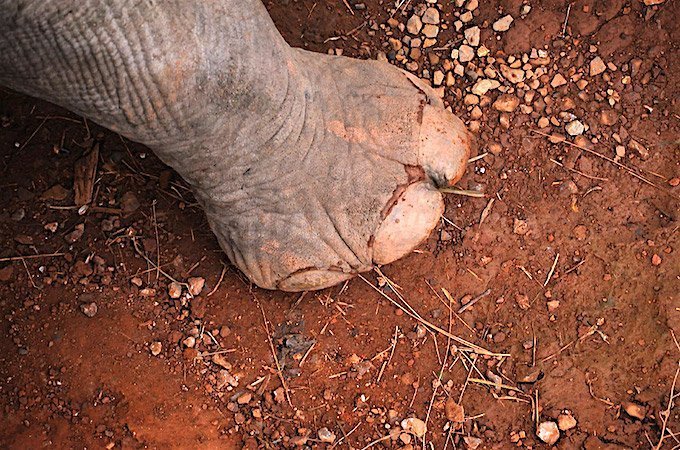 The footsteps of big animals bring landscapes to life

Life begets life. It’s the cardinal rule of ecology, an affair not merely of reproduction, but of interaction. Life makes more life possible. And nowhere is that subtle but essential principle more evident, perhaps, than in the footprints of African elephants.

With full-grown adults weighing up to 14,000 pounds, elephants leave bucket-sized depressions in soft ground. Water gathers; during dry seasons, those depressions remain as tiny ponds. And as described in a study conducted in Uganda’s Kibale National Park and published in the African Journal of Ecology, they teem with life.

More than 60 species live in those footprint pools: tadpoles and mites, beetles and midges. For these creatures, wrote the researchers, who were led by biologist Wolfram Remmers of Germany’s University of Koblenz-Landau, the pools are vital habitat. “In the dry season in our study area,” said Remmers, “elephant footprints make up the large majority of stagnant ponds.” They may even serve as corridors for distributing those pool-dwelling animals across vast and otherwise parched distances.

Elephants are already known as keystone species whose activities shape their ecosystems, something usually explained in terms of how they eat acacia and clear vegetation. The new study adds nuance to the notion. “The ecological importance of elephants as ecosystem engineers in Africa’s different landscapes is not fully understood,” wrote Remmers’ team.

The findings also point to a troubling question: if African elephants continue to be slaughtered, what will become of the ecosystems to which they’re now so vital? “The loss of them would certainly be very significant,” says Remmers. One might even talk of impoverishment.

For the moment, though, just appreciate the marvel of ecological interaction, of creatures so big that their footsteps support life. This isn’t restricted to Africa: consider moose, who while foraging for aquatic plants kick great pulses of mud—of nutrients—into the waters of the northern hemisphere.

In a study published in Oikos, researchers led by Michigan Technological University ecologist Joseph Bump tried to quantify those pulses. Where moose fed, water concentrations of phosphorus were some 42 times higher than in undisturbed waters. Nitrogen levels nearly tripled.

In some bodies of water, wrote Bump’s team, moose foraging likely accounts for a large portion of those nutrients, which are foundational to food webs and ripple outwards into many other species. Exactly how much life all that phosphorus and nitrogen produces remains to be studied, but the researchers raise the possibility of “lake-level ecological consequences.”

Moose populations are also declining, though not as precipitously as African elephants. One wonders what cascades of life might be lost in their absence. But for the moment, look at them and think: simply by moving, life begets more life.