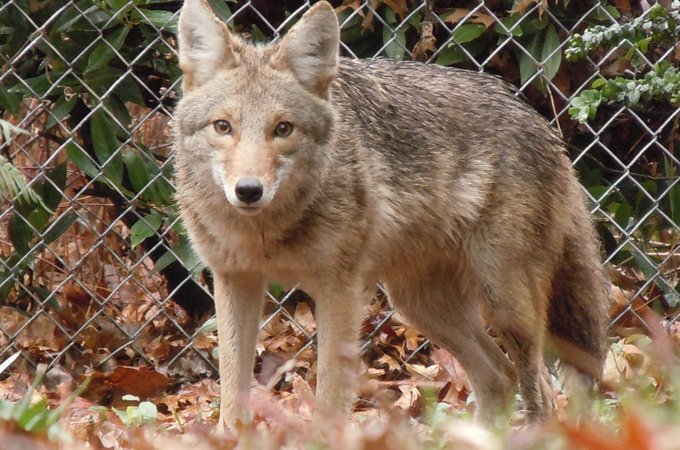 Coyotes live in almost all US cities. Here’s how to avoid trouble with them

Of 105 US cities surveyed, coyotes are present in all of the large and medium-sized cities, and in three-quarters of the small cities.
By Sarah DeWeerdt
September 20, 2016

Humans are becoming an increasingly urban species and, across the United States, so are coyotes.

Researchers from Utah State University recently surveyed wildlife officials in 105 urban areas around the country, ranging in size from from about 100,000 residents on up to New York City with over 18 million. They found that 96 of the cities, or 91 percent, are home to coyotes. Coyotes are present in all of the large and medium-sized cities surveyed, and in three-quarters of the small cities.

“Coyotes are ubiquitous throughout North America and have learned to adapt to and thrive in one of the most extreme habitats for wildlife species, urban development,” the researchers write in the journal Landscape and Urban Planning.

However, three-quarters of the cities that have coyotes also have coyote-human conflicts, defined as a coyote behaving aggressively towards (baring teeth, growling, stalking) or physically attacking a person or a pet.

Most cities don’t formally track the number of coyote-human conflicts, and residents of different cities may not be equally likely to report these encounters. Still, officials in many cities were able to provide ballpark estimates. About three-quarters of the cities with human-coyote conflicts experience fewer than 40 such incidents each year. But four cities—Denver, Colorado; St. Louis, Missouri; Portland, Oregon; and Colorado Springs, Colorado—reported over 100 conflicts annually.

Conflicts are less common in the Northeast, perhaps because coyotes are relative newcomers there, having colonized the region starting in the 1950s. So these coyotes may still be adjusting to urban life and may not be as habituated to humans.

Coyotes in the Northeast are also hybrids between western coyotes and eastern wolves. Their wolf DNA may make these animals shyer around humans, as well as larger than western coyotes and therefore dependent on larger prey, such as white-tailed deer, that are more common outside the urban core.

The occurrence of coyote-human conflicts depends not just on the size and location of a city but also on its particular characteristics. More low-density, exurban housing reduces the probability of conflicts, while more high-density urban development increases them.

Urban areas with more forested and agricultural land are less likely to have conflicts. Within cities, coyotes tend to prefer less developed areas, and the availability of such habitats may enable them to stay out of the way of humans.

At the same time, especially dense forest cover may result in surprise encounters between humans and coyotes that lead to conflicts.

Such findings can provide clues to wildlife officials about where conflicts are likely to occur, which in turn can give them a leg up on preventing them, the researchers say. Possible strategies include public education to encourage people to reduce food sources for coyotes; advice on what to do if they encounter one of the animals; ‘hazing’ of coyotes so they don’t become habituated to humans; and landscape design that provides natural areas for coyotes but reduces dense cover.

Right now, among the 71 urban areas where there are coyote-human conflicts, officials in only 11 of these areas, or 15 percent, consider addressing these conflicts a high priority. But city residents who have experienced such encounters may see things differently, the researchers say.

So far, most wildlife managers are dealing with such conflicts through public education rather than by managing individual coyotes. That approach has contributed to making large urban areas into refugia for coyotes, since they are less likely to be killed or removed in cities than they are in many rural areas. And paradoxically, this increased urban coyote population also makes conflicts with human urban dwellers more likely to occur. Still, it’s clear that cities have the potential for coexistence between people and carnivores. The challenge now is to ensure that coexistence is a peaceful and sustainable one.

Header image: Coyote in Portland, OR via SoulRider.222/Flickr