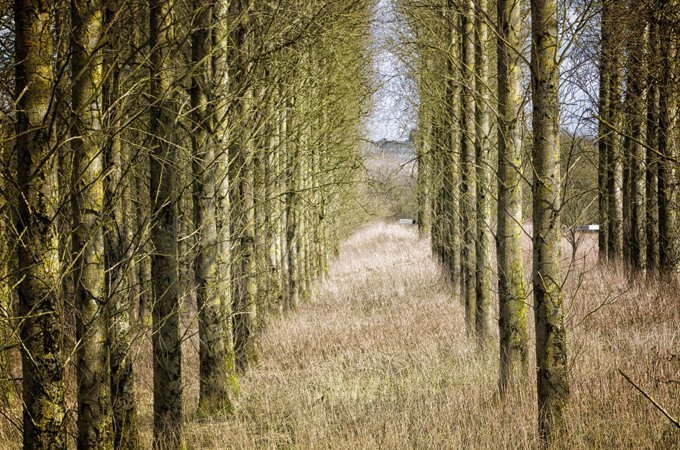 Inoculating poplar trees with a dose of bacteria and fungi that live within the plants allowed the poplars to grow more and enabled them to better withstand an induced drought.
By Catherine Elton
September 23, 2016

Many of us have taken a probiotic or double downed on yogurt to protect our digestive health or treat stomach troubles. Plants also have friendly microbes living inside them that help them fend off illness and tolerate environmental stressors like drought. The power of these microbes is of increasing interest to scientists looking for ways to make agriculture and forestry more environmentally sustainable.

In a study published recently in the journal Current Plant Biology, researchers focused on poplar trees, a promising candidate for biofuel stock. They found that inoculating poplar trees with a dose of endophytes—bacteria and fungi that live within the plants—allowed the poplars to grow more and enabled them to better withstand an induced drought. This means that these plants could be raised more efficiently, using less water.

Researchers isolated nine bacteria and one yeast strain from poplars and willows growing in challenging environments. In a greenhouse, they grew 20 hybrid poplar plants. They poured a solution of these endophytes onto the base of ten of these plants, and the other half received a run-of-the-mill, store-bought nutrient solution for plants. A month and a half later, the researchers withheld water from all 20 plants for one month, documented their reactions and then harvested them.

While the control plants started to brown 20 days after water was withheld and wilted at the one month mark, the inoculated plants were green at 20 days and retained turgor at one month. Researchers found that the plants that received the endophyte cocktail had a 28 percent increase in total biomass, 43 percent higher plant nitrogen, and a 23 percent increase in root to shoot ratio, as compared to the control plants.

Researchers are now taking these promising results to the field, where they hope to find similar effects. They also performed a genetic analysis of the endophytes they used  in hopes of beginning to understand the mechanisms behind the microbes work and which of their genes are involved in the process. The researchers are also working on similar experiments with food crops. If the findings of these field trials are positive, we may be able to enlist the tiniest of allies in the giant challenge of growing food and fuel in a hotter and drier future.