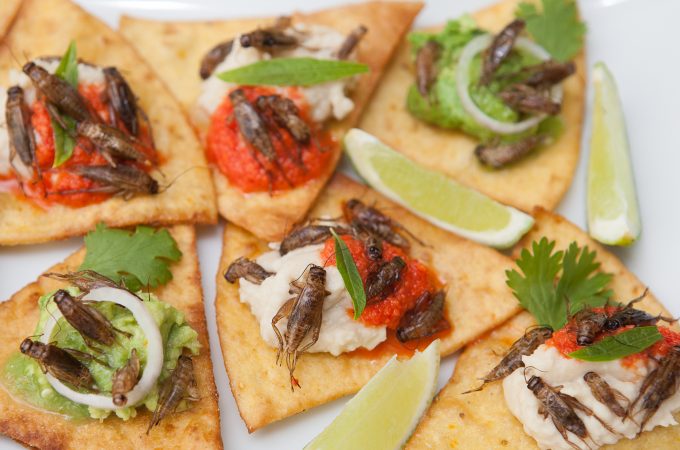 Researchers demonstrated that a diet based on an agricultural byproduct and one based on a weed were just as good as one using chicken feed for raising crickets.
By Catherine Elton
September 30, 2016

With livestock production recognized as an inefficient and environmentally-unfriendly way to feed a growing and warming planet, insects are increasingly hailed as a sustainable, alternative source of protein. At least in theory. The problem when it comes to crickets—one of the most promising insects for widespread human consumption—is that they are either wild-harvested or raised on chicken feed.

“Neither of these are sustainable,” says researcher Anna Jansson of the Swedish University of Agricultural Sciences. “Collecting wild crickets, if it gets really popular, can be a threat to wild populations. Chicken feed is based on cereals like soybean meal, which is something we could eat ourselves. It’s not the most efficient use of resources.”

In a development that could make cricket production green, Jansson and colleagues demonstrated that a diet based on an agricultural byproduct and one based on a weed were just as good as one using chicken feed for raising crickets in Cambodia.

For the study, published recently in the Journal of Insects as Food and Feed, the researchers collected wild Cambodian field crickets (Teleogryllus testaceus) and raised two generations from these harvested crickets. Nearly a thousand of these third generation crickets were part of a 70-day feeding experiment in which they were placed on one of twelve different diets. The eleven experimental diets included a single food source: one of seven weeds, cassava plant tops, water spinach, spent grain, or waste from mung bean sprout production. The control diet consisted of chicken feed.

The researchers monitored survival rates and weight gain and calculated the food conversion rate for each feed. They found that crickets fed either cassava tops (the uppermost leaves of the cassava plant) or the weed C. rutidosperma gained as much weight throughout the study as the crickets given chicken feed. With the exception of three weeds, the authors say, most other feeds could be used if resources were scarce.

According to Jansson, the researchers just won a million dollar grant to expand upon this research with crickets in Sweden. Their future work will include an assessment of any hygiene risks that might exist in the food chain and will also include having a chef prepare two cricket dishes. One will aim to appeal to children and one will be a more sophisticated take on the insect.