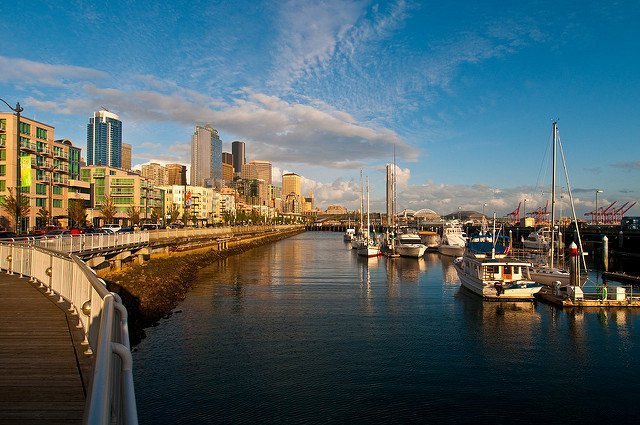 Urban shorelines in Puget Sound are home to more animal species than less developed shorelines in the region, according to a new DNA study.
By Sarah DeWeerdt
September 27, 2016

We often assume that urban areas are home to an impoverished, degraded animal community. But this isn’t always the case. Nearly 4 million people live along the shorelines of Puget Sound in Washington State, but a new study shows that urban shorelines are home to more animal species than less-developed shorelines in the region.

The study, published 13 September in PeerJ, is the first to use environmental DNA to investigate the impact of urbanization on animal diversity.

Environmental DNA, or eDNA, is ubiquitous in the air, soil, and water, released as organisms shed cells and produce waste. It offers an approach to environmental monitoring that is much less time- and labor-intensive than traditional methods.

“We can go out, take a sample of water, and the DNA from thousands of species appears,” says Ryan Kelly, assistant professor of marine and environmental affairs at the University of Washington and the study’s lead author. “This way, we don’t have to decide if we are going to count snails or orcas when we look at environmental impacts. Instead, we can just look at what’s there.”

Kelly and his collaborators from the University of Washington, the University of Oregon, and the Northwest Fisheries Science Center in Seattle collected water from 8 locations around Puget Sound: four in highly urbanized settings, like the outlet of Pipers Creek in Seattle, and four in less-developed areas, such as Shingle Mill Creek on Vashon Island.

They fished from the water all cells larger than bacteria, then sequenced certain bits of DNA from these cells to identify the different creatures present.

The eDNA analysis detected the genetic signatures of 1,664 distinct types of animals living near Puget Sound’s shorelines, including barnacles, eagles, clams and mussels, porpoises, salmon, eagles, and even people.

The four highly urban sites sampled in the study are home to a total of 1,295 different kinds of animals belonging to 116 families, while the less-urban sites harbor 790 creatures from 80 families.

Clams and snails are especially diverse in urban waters, the researchers found. “Clams and other things that live in mud seem to like living near cities, which is really interesting,” Kelly says.

Nutrient inputs from runoff adjacent to developed areas may boost productivity and animal diversity at the urban sites. Or, it could simply be that humans tend to build cities next to areas where lots of these mud-dwelling organisms live.

The increased diversity at urban sites is not due to introduced or invasive species, the researchers say. Urban sites also tend to differ from each other just as much as less-developed sites do, so there’s no generalized “urban” community of marine animals that’s the same everywhere you go.

However, the species makeup is more homogenous within highly urbanized sites than it is within less-urbanized sites, suggesting that development has subtle effects on the species composition and diversity of an ecosystem.

The eDNA method isn’t perfect. It can’t – at least for now – indicate the abundance of a particular species at a given site. And it doesn’t always capture all the species present: in the new study, genetic signatures of some species known to inhabit the study sites were not detected.

Still, the results support the use of eDNA to monitor the subtle effects of development. “It is now possible to use genetic traces in water samples to look at the effects of human activities on ecosystems,” Kelly says. Sometimes, that should allow scientists to identify worrisome trends. Other times, it might lead to a happy surprise.