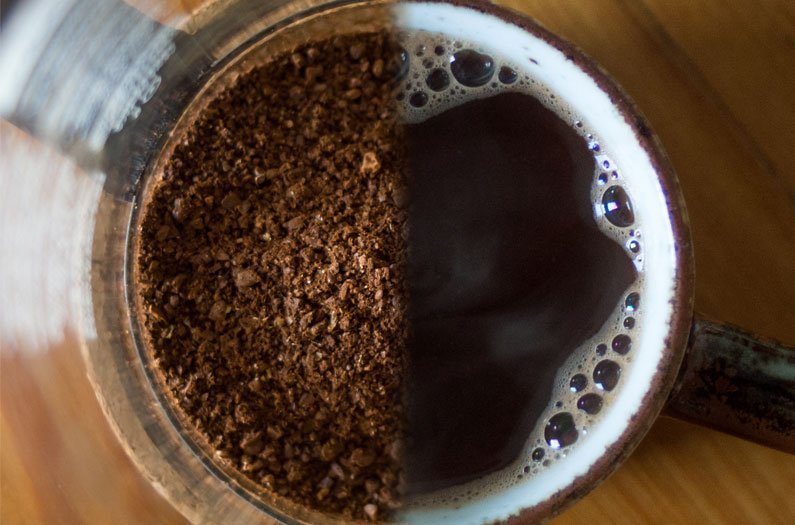 There's a surprising use for used coffee—one that solves another environmental problem, too. Coffee can remove heavy metals such as lead and mercury from water.
By Catherine Elton
October 14, 2016

Each year, coffee drinkers across the globe create six million pounds of waste in the form of spent coffee grounds. Some of us chuck it in our compost pile, but most of it becomes just another garbage disposal challenge.

It turns out that there is a surprising use for used coffee—one that solves another environmental problem, too. Coffee can remove heavy metals such as lead and mercury from water.

In the past, researchers have experimented with placing coffee grounds in water contaminated with heavy metals. The coffee was effective at binding to the heavy metal ions, but it was extremely difficult, says researcher Despina Fragouli, to get the coffee out of the water afterwards.

She and a team of researchers from Italy have found a novel solution to this problem.

“By introducing the spent coffee grounds into a polymeric foam, we formed a solid composite system…that is easy to manipulate…[and that] can be used as a filter,” she says.

For the study, which was published recently in ACS Sustainable Chemistry and Engineering, the researchers oven-dried and ground the coffee into a powder. They mixed the powder with sugar and a silicone elastomer to make a filter that’s 60 percent coffee and 40 percent foam. Then the researchers made 20 ml solutions with different concentrations of lead and mercury and immersed a 0.2 gram piece of the foam into the solutions.

They also conducted an experiment that more closely mimicked a real life filtration system in which the solution flows over the filter. They experimented with four different speeds. At the fastest speed of 1,200 milliliters per hour, the foam removed 4.25 percent of the lead. At the slowest speed of just 2ml/h, it removed 66.72 percent. Fragouli says her team is now experimenting with thicker filters in order to increase these rates.

Next, the researchers will need to determine whether the coffee filter still works in water that also contains organic pollutants. Fragouli believes that if they are successful, the filter could used at industrial sites and in urban waste water processing plants. They are also in the process of studying whether it can remove enough heavy metals from water to make it safe for human consumption.