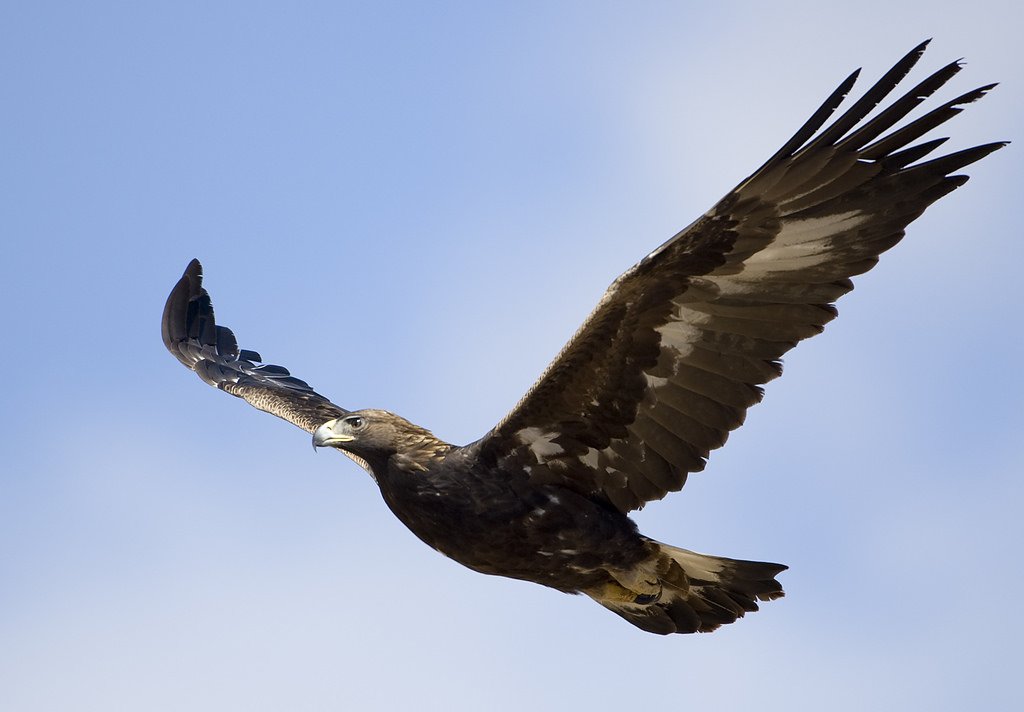 Researchers have gathered evidence that deaths of golden eagles (Aquila chrysaetos) at a single wind farm in northern California may have effects on the entire western U.S. population of this species.
By Sarah DeWeerdt
October 18, 2016

Hundreds of thousands of birds are killed each year by wind turbines worldwide. But few studies have looked at the demographic consequences of this local-scale mortality for a species as a whole.

Now, researchers have gathered evidence that deaths of golden eagles (Aquila chrysaetos) at a single wind farm in northern California may have effects on the entire western US population of this species.

The researchers studied 67 golden eagles killed by wind turbines at the Altamont Pass Wind Resource Area, one of the largest and oldest wind farms in the country.

“Eagles tend to use that habitat around the turbines. It’s windy there, so they can save energy and soar, and their preferred prey, California ground squirrels, is abundant there,” says J. Andrew DeWoody, professor of genetics in the Department of Forestry and Natural Resources at Purdue University. “As they soar, these eagles are often looking straight down, and they fail to see the rapidly moving turbine blades. They get hit by the blades, and carcasses are found on the ground under the turbines.”

DeWoody and his colleagues measured the levels of various isotopes, or forms, of hydrogen in the birds’ feathers. This analysis can help determine whether an individual eagle was born nearby or is a recent immigrant to the area.

“When a bird drinks water or eats animals in a particular place, the hydrogen isotope ratios of precipitation in that area get recorded in its tissues,” says David Nelson, a stable isotope ecologist with the University of Maryland Center for Environmental Science. “You can use these hydrogen ratios in the feathers to determine the approximate place that the bird grew its feathers.”

The feather analysis suggests that about one-quarter of the birds killed at the wind farm were recent arrivals, the researchers report in the journal Conservation Biology.

The proportion of birds that originated elsewhere is probably even greater, but the feather analysis can only distinguish birds that arrived in the area within the previous 12 months.

Most of the immigrant eagles originally came from over 100 kilometers away.

The researchers also analyzed the eagles’ DNA, which showed no difference between local and nonlocal birds. This supports the notion that golden eagles west of the Mississippi are all part of the same interconnected population.

Finally, they used a computer model to gauge the effect of wind farm mortality on golden eagle population dynamics. The area has a fairly population of about 330 birds, including 75 nesting pairs. But this number only remains stable because of the influx of immigrants, mostly 2- to 4-year-olds, from elsewhere.

Overall, the analysis suggests that the wind farm is a population “sink” for golden eagles.

Many raptor populations in western North American have rebounded in recent years, but golden eagles have not. Wind farm mortality may help explain why, the researchers say.

On the plus side, that suggests efforts to help golden eagles elsewhere in the western U.S. could help mitigate wind farm mortality.

But it also means that managers need to take into account wind farm mortality at a broader scale than they had previously appreciated. “If you only consider local birds in an environmental assessment, you’re not really evaluating the effect that facility may have on the entire population,” says Todd Katzner, a wildlife biologist with the U.S. Geological Survey.