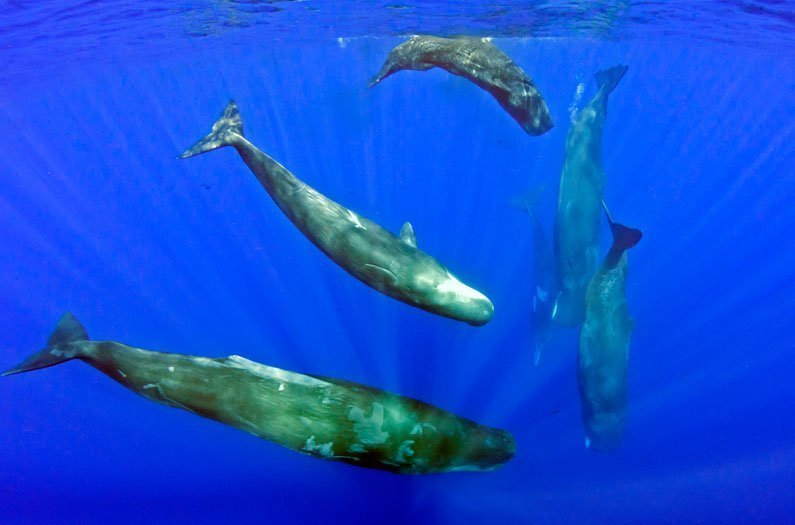 The fall and rise of sperm whale cultures

It’s a time of cultural upheaval: between urban and rural, millennials and boomers, liberal and conservative. But it’s not only humans who have cultures. So do animals — and a dramatic change is taking place among sperm whales living off the Galápagos Islands.
By Brandon Keim
October 26, 2016

It’s a time of cultural upheaval: between urban and rural, millennials and boomers, liberal and conservative. But it’s not only humans who have cultures. So do animals — and a dramatic change is taking place among sperm whales living off the Galápagos Islands.

In just a few decades, two whale clans there have departed for coastal South America. Two other clans have replaced them, a shift described in the journal Royal Society Open Science by researchers led by Dalhousie University biologist Mauricio Cantor.

Also involved in the study were biologists Hal Whitehead, Shane Gero and Luke Rendell, whose pioneering work on sperm whale vocalizations has revealed new dimensions to the deep-diving giants’ lives. They’ve decoded codas used by the whales to identify themselves both individually and as members of families belonging to clans that communicate in different dialects — a difference not restricted to vocalization patterns, but emblematic of distinct hunting and child-rearing practices.

These behaviors, they’ve found, are rooted not in biological heredity but in information shared between individuals and across generations. Clan territories can span thousands of square miles of ocean; sometimes they overlap with other clans, with whales sharing a physical space but restricting social interactions to members of what might be considered their own tribe. In that light, population movements chronicled in the new study can be understood as “the fall and rise of sperm whale cultures,” write Cantor’s team, who suspect the saga is  linked to environmental changes that favored different foraging strategies. It’s a fascinating question.

An equally fascinating but sadly unfortunate tale comes from the Eastern Caribbean, where Gero and Whitehead have documented a sharp decline in sperm whale populations. Since 2010, they report in PLoS ONE, whale numbers have dropped by 4.5% per year. The causes aren’t entirely clear but likely involve some combination of factors including climate change, ship collisions and entanglement in fishing nets.

If the trend continues, it won’t be long before those whales are gone — and that won’t be something to understand in the clinical language of extirpated populations, but in terms of lost cultures and ways of life.

The researchers urge the International Union for the Conservation of Nature (IUCN) to consider the Eastern Caribbean sperm whales for special protection. If that happens, it won’t be because the species is threatened, but because a culture is threatened. Such an approach “would be new for the IUCN,” says Rendell, “and is still not something that is widely considered within conservation at large.”

“If extirpated,” Gero and Whitehead write in PLoS ONE, “this population cannot be replaced.”