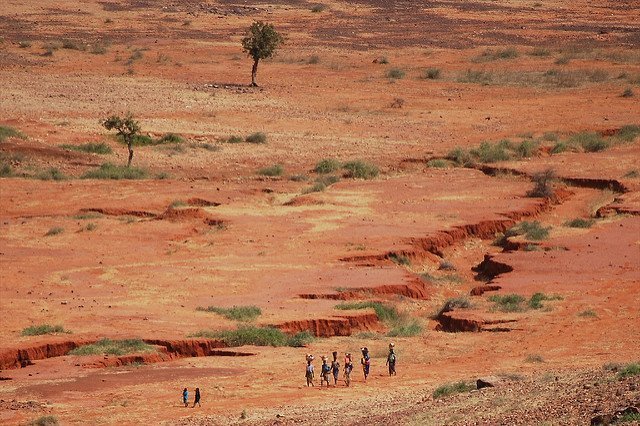 Most of the crops planted on lands bought by foreign investors are highly water intensive as compared with the crops traditionally grown by local farmers
By Catherine Elton
October 7, 2016

Over the past few years, many headlines have reported that foreign investors, particularly from China, have acquired vast tracts of land in Africa. A sharp rise in global food and fuel prices in 2007 and 2008—and fears of future crop shortages as global populations swell—appear to have spurred the phenomenon. Some saw these deals as a way to modernize Africa’s lagging agriculture and spur economic development. Detractors pointed out a number of concerns, not the least of which is that these investments could increase competition with local communities for water.

A recent study has analyzed these land deals to model how much water they are likely drawing from rivers, lakes, and aquifers. The researchers found that despite the fact that land acquisitions since 2000 occupy an area the size of the United Kingdom, only 3 percent of this land is actually in production. That said, researchers found that most of the crops planted on these lands are highly water intensive as compared with the crops traditionally grown by local farmers. In the best case scenario, close to a fifth of them could be depending on natural bodies of water for the majority of their water needs.

For the study, which was published recently in the Proceedings of the National Academy of Sciences, researchers used the Land Matrix database, which registers land acquisitions over 200 hectares with at least one foreign investor. The database includes information on which deals are in production and what the land is being used for.  The researchers corroborated this information with satellite images.

The researchers then used a computer model to calculate how much irrigation water, which they refer to as blue water, the crops would need in addition to rainwater (which they call green water). The calculations were based on the crops’ needs under the specific climate conditions at their location.

Since there was no information available on what kind of irrigation systems are being used, the researchers ran several different models ranging from a low efficiency, inexpensive irrigation system (like surface irrigation) all the way to the most efficient and expensive drip systems. They also calculated a baseline water usage scenario based on how much water local, small-scale farms use to raise traditional crops. According to the authors, rarely do these deals stipulate how much water can be used.

Among their findings were that nearly 60 percent of the acquired land in production is for forestry, with the remainder used for food, biofuel, and, to a lesser extent, crops like coffee, tea, and flowers. They also found that the crops being planted require between 76 and 86 percent more blue water than what traditional staple crops would require, demonstrating that the deals have increased water demand.

Under efficient irrigation systems, 18 percent of the planted area on these lands would derive more than half of their water needs from natural bodies of water, with less than half coming from rain. The authors define these areas as hot-spots, or areas where the possibility of conflicts or tension over water is likely to arise.

Lead author Emma Li Johansson says she was surprised that such a small portion of these acquired lands are actually in production. That could mean there is time to change course. Ideally, she says, regulations could be put in place to determine not only which crops can be grown where, but what kinds of irrigation systems can be used.