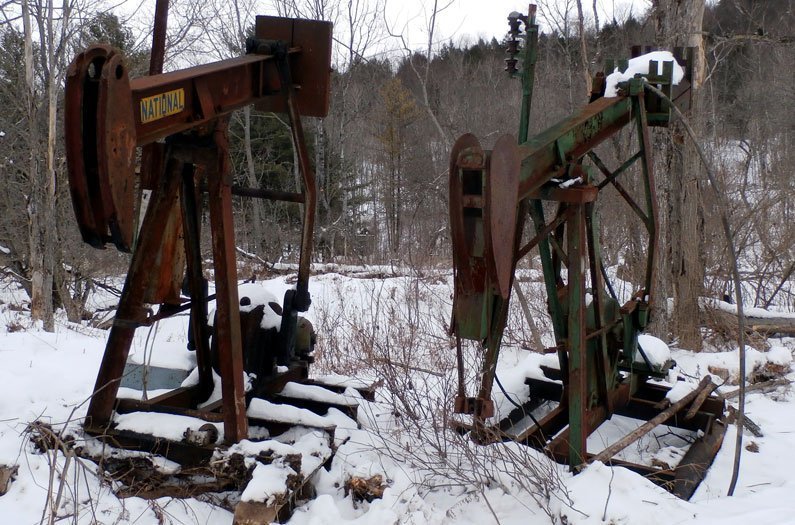 Zombie oil and gas wells are belching greenhouse gases. (Here’s how to stop them.)

Methane from abandoned oil and gas wells isn’t accounted for in current greenhouse gas budgets. But dealing with it could be a relatively simple effort with a big climate impact.
By Sarah DeWeerdt
November 15, 2016

Abandoned oil and gas wells in Pennsylvania account for 5 to 8 percent of the human-caused methane emissions in the state, according to an analysis published yesterday in the Proceedings of the National Academy of Sciences.

This source of methane—a greenhouse gas 86 times more potent than carbon dioxide—isn’t accounted for in current greenhouse gas budgets. But dealing with it could be a relatively simple effort with a big climate impact.

No one knows exactly how many abandoned oil and gas wells there are. Records are incomplete, especially for older wells from the early years of our century-and-a-half-long era of oil and gas development.

In the new study, researchers turned to a combination of historical documents, scientific literature, state databases, and boots-on-the-ground fieldwork to get a better understanding of the number of abandoned wells in Pennsylvania. Their estimate of 470,000 to 750,000 abandoned wells in the state is still likely to be a conservative one, they say.

This means that the commonly cited estimate of 3 million abandoned oil and gas wells in the United States is also likely to understate the situation. And, of course, there are many millions more abandoned wells around the world—numbers that will only increase in the future.

Abandoned wells are thought to be a significant source of methane, but until now no one knew how to identify the highest emitters. So the researchers measured methane flow from 88 wells across Pennsylvania. Nearly all abandoned oil and gas wells—90 percent—are releasing methane, they found.

All told, abandoned wells in Pennsylvania release an estimated 0.04 to 0.07 metric tons of methane annually, which amounts to 5 to 8 percent of the state’s annual anthropogenic methane emissions.

Natural gas wells emit more methane than oil wells. Gas wells that have been plugged have lower methane emissions than unplugged wells. But wells that are plugged and ‘vented,’ a safety feature that some states require in coal areas, tend to be high emitters of methane.

The results suggest that government agencies should look for alternative techniques to venting that protect safety while also preventing methane emissions, the researchers say.

The findings could also help prioritize mitigation efforts. Focusing on the highest emitting wells—unplugged gas wells in non-coal areas, and plugged but vented gas wells in coal areas—would provide the biggest bang for the buck in terms of avoided greenhouse gas releases.

Multiple measurements from the same wells over the course of two years showed that low emitters have somewhat variable methane emissions, but high emitters tend to release lots of methane consistently over time. That makes the high emitting wells an even more attractive target for mitigation.

Abandoned wells release methane continuously, presumably over the course of many decades. So mitigating emissions is a one-time effort that could pay substantial climate dividends in the long run.

Header image: Save Our Streams