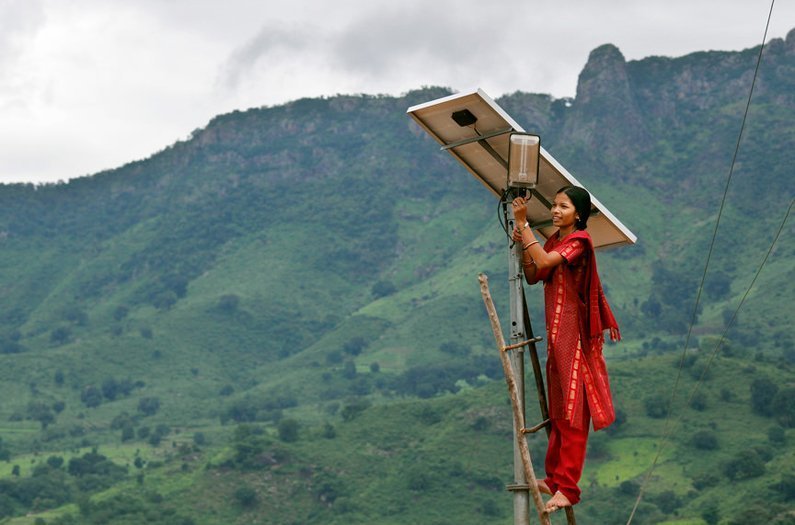 Whether a switch to 100% renewable power around the world will happen will ultimately depend on political and public will. Nonetheless, small regional pushes towards renewables are already taking place.
By Prachi Patel
November 17, 2016

A new computer model shows that a power grid that works entirely on renewables is possible globally by 2030. In doing so, the global power system will meet the targets set by the Paris agreement.

Growth in solar, wind, and other renewables has been surging in recent years. But there is still a widely held belief that renewables cannot meet electricity demands every hour of the day all year round, given the fluctuating nature of wind and solar energy, and that coal and nuclear power plants will be necessary to support renewables.

That belief is a myth, say researchers at Lappeenranta University of Technology in Finland who created the first-of-a-kind computer model. The “Internet of Energy Model” shows that renewables, mainly solar and wind, could indeed seamlessly power all regions of the world.

“My hope is that we can finally stop debating about these myths,” Pasi Vainikka, a scientist at the VTT Technical Research Centre of Finland said in a press release. “The visualization shows exactly how a fully renewable electricity system operates. So let’s just build it.”

Whether or not a switch to 100% renewable power around the world will happen or not will ultimately depend on political and public will. Nonetheless, small regional pushes towards renewables are already taking place. Costa Rica last year ran entirely on renewables for 76 days straight. Three American cities are already 100% renewably powered, and seven more aim to join them in the next 20 years. The Canadian government says it will run its operations on renewables by 2025.

Last year, researchers at Stanford University laid out details on how 139 countries could meet all their energy needs for renewables by 2050. The new Finnish model is similar but covers the whole world. It arranges the world into nine major regions and 145 smaller regions. Users can run simulations in any region to find the most economically viable way to produce electric power using renewables while covering electricity demands for every day of the year.

The simulation showed that renewable energy could be implemented with a cost of $59 to $76 per megawatt hour around the world. The researchers presented results of the model at the World Clean Energy Conference.

Next, the researchers plan to expand the model and include other energy sectors such as heat and transport as well. And they plan to add more information about how countries can best transition from their present energy systems to a completely sustainable model.