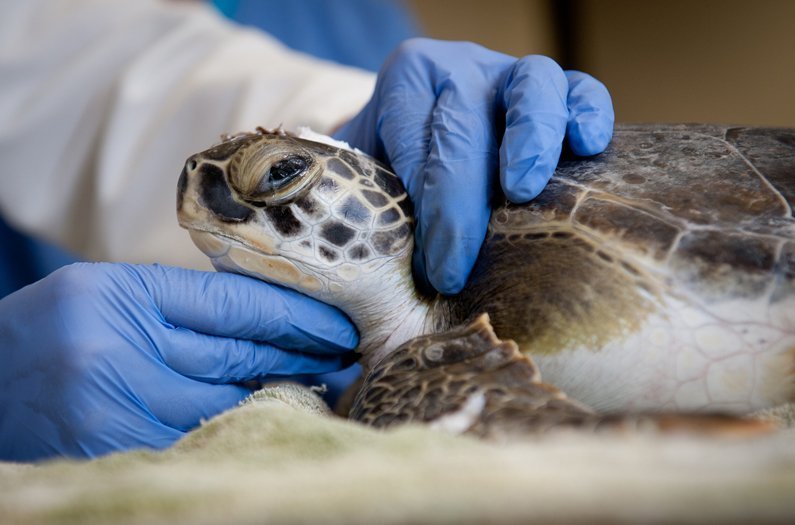 A health care revolution … for wildlife?

In recent years, a debilitating cancer found in sea turtles has spread to every major ocean. What if leading-edge medical techniques developed for humans were used to help animals, too?
By Brandon Keim
November 30, 2016

The first cases of fibropapillomatosis, a debilitating form of cancer found in sea turtles, were identified off the coast of Florida in the late 1930s. For decades the disease stayed there; in recent years, though, it’s spread to every major ocean, endangering populations and raising the nightmare possibility of a sea turtle cancer epidemic.

But what if leading-edge cancer-fighting techniques developed for humans were used to help animals, too?

Researchers led by University of Florida biologist David Duffy raise that possibility in a new Global Change Biology article about “precision wildlife medicine,” an approach that would draw upon innovations in human disease treatment. Combining modern medical techniques with traditional conservation efforts “will be essential to combat species decline,” they write.

As Duffy and fellow biologists Jenny Whilde and Mark Martindale describe, advances in medical biology—the ability not only to rapidly sequence genes, proteins and other cellular products, but to trace biological pathways and understand disease mechanisms—are revolutionizing aspects of human health. “Our response to viral outbreaks has never been more rapid,” they write, as seen in the recent developments of Zika diagnostics and Ebola vaccines; some cancers are treated with drugs custom-tailored to their mutation profiles; conditions that once defied explanation have been explained.

At the same time, outbreaks in wild animals have become ever more problematic. To be sure, disease is a natural, even integral, part of ecological dynamics across time, and in an ideal world we’d let nature do the doctoring. But the world is not ideal. Our activities seem to have accelerated the emergence and spread of wildlife disease. Fragmented populations living in diminished habitats and threatened by humans are, unsurprisingly, vulnerable to illness. If we have a prescription, now’s the time to write it.

“Species conservation could be improved by using precision medicine techniques,” write Duffy’s team. As examples they give fibropapillomatosis, now treated by treated by time- and labor-intensive surgery; by profiling tumors, the researchers have found drugs that might attack them. Cancer is also a problem in beluga whales in Canada’s St. Laurence estuary and also Tasmanian devils in Australia, and might be approached in a similar way. Western gorillas vulnerable to ebola could be given vaccines. Amphibians threatened by chytridiomycosis, a disease caused by a pathogenic skin fungus, may benefit from bacterial treatments that enhance their resistance.

Scientific questions still remain, of course. Once those are answered, ethical questions come next. Some people may worry that, in a larger sense, precision wildlife medicine might amount to treating symptoms while avoiding the fundamental problems giving rise to disease. Fibropapillomatosis, for example, occurs naturally but seems to have been exacerbated by pollution and rising ocean temperatures. No drug will fix that, and if our responsibility to stop polluting is expiated by treating a few turtles, any so-called cure would be a conservation placebo.

In a similar vein, those beluga whale cancers are caused by human-spread toxins. Duffy’s team acknowledges that while “it would be preferable” to prevent toxins “from entering the environment at all, the fact remains that the onus is on humans either to enact relevant environmental protection legislation or to develop treatments for species affected by such pollution.” While waiting for root causes to be addressed, we might as well treat what disease we can.

This might still seem frivolous to some people. After all, there are plenty of humans who lack basic health care, much less access to the fruits of a revolution in precision medicine. But that doesn’t eliminate our responsibilities, and compassion is rarely a zero-sum game. It’s also quite likely, write Duffy’s team, that lessons learned from studying and treating disease in wildlife can eventually be applied to human health. Taking care of Mother Nature might also be good for us.