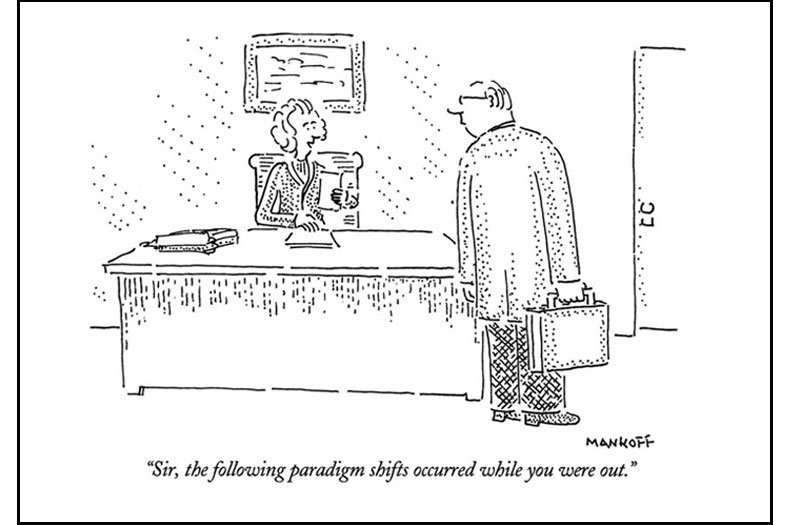 What’s the new game plan for sustainability in an age of Trump?

First with Brexit and now with Trump, we have entered a new political moment. Whatever the future holds, it will not be business as usual.

We are witnessing a shift away from some of the most basic premises of sustainability work—international agreements and cross-border cooperation—toward isolationism and even climate change denial.

Once we get over the initial shock, we (the sustainability community) need to ask ourselves some hard soul-searching questions. What changes do we need to make? How should we approach sustainable development and environmental work differently? And what deeply held assumptions should we reexamine?

Here, we start the conversation with several excerpts from recent commentaries on the Trump election in the US. While this is certainly the biggest news peg on the topic right now, we realize the wave of isolationism isn’t confined to the US and Europe. So we encourage a broader global conversation. What do you think?

1.  Nations are now even less relevant than cities for climate action

We must begin by understanding that the U.S. Federal government — while hugely important — is not the only game in town . . . State, regional, and local governments already have enormous power to change climate policies. And in Blue America, the political will already exists for bold and decisive climate action.

States can follow in the footsteps of the California’s bold new climate action laws. California, in turn can step up its own efforts, adding serious housing development policies, strict smart growth rules, rewriting obsolete anti-development laws, and encouraging a rapid shift away from auto-dependence. Most boldly, states can implement their own carbon taxes . . . If set high enough, started soon enough and raised fast enough, state-level carbon taxes could have a transformative effect on their economies . . .

Cities and urban regions are already the epicenters of American climate action. Now it’s time for them to genuinely take the lead, and they can. A whole host of smart solutions are waiting to be implemented, right off the metaphorical shelf, from passivhaus building standards to rapid-deployment bike lane networks, eliminating parking requirements to implementing congestion charges

2.  We need to get comfortable with doing the right thing for the wrong reasons

Scientists should ask themselves whether they would support policies that did what they regard as the right thing, but for the ‘wrong’ reasons. Policies focused on deploying electric vehicles and nuclear or wind power may be justified in purely economic rather than environmental terms. Alternatively, environmental regulations may provide convenient cover for the taxing of imports as the USA struggles to justify a new protectionism. When it comes to climate change, maybe the pragmatic business of policy design might finally take precedence over trying to convince a Republican Congress to see the world through a climate scientist’s eyes.

We are witnessing a political weirding that renders our traditional left-right frames mostly useless. In their place, we see two still-forming political phenomenons:

1. A hodge-podge but powerful populism spans from the far left of the Sanders coalition to the extreme right of Trump’s voters

2. A newly muddled alliance of the ‘moderate’ has grown from Trump’s increasingly unpresidential antics and America’s other center of power, Silicon Valley. Together, reasonable Republicans and business-minded Democrats increasingly align around progressive social views on immigration and gay marriage, a sympathetic ear to business interests, and a voting bloc that can dominate the war for campaign donations and win elections.

How and when these two forces intersect will likely drive the most important and interesting conversations in politics for the foreseeable future.

4.  We need to take an honest look at who’s benefiting from technological innovation—and who’s not?

U.S. and European elites pretend that unfettered technology will not only grow the economy but also close the gap between rich and poor. A recent issue of Wired magazine brought Obama into conversation with the gurus of Silicon Valley. Tim O’Reilly hailed the magic bullets of innovation, telling Obama that, “The best way for the tech industry to tackle inequality is for it to do what it’s supposed to do: innovate in ways that create actual gains in growth and productivity”.

History tells us how bad this analysis is. Technology tends to widen the gap between rich and poor, simply because rich people are better able to take advantage of productivity gains than poor people. And yet the narrative of emancipatory technology continues. Meanwhile, Donald Trump gave an interview to Breitbart, a heavily partisan news site that has become depressingly relevant, in which he said, with reference to artificial intelligence, “I have always been concerned about the social breakdown of our culture caused by technology”. Now is the time to ask who really benefits from American innovation, and to rethink the responsibilities of scientists in engaging with inequality.

5.  Infrastructure investment is something we can agree on. Let’s make it sustainable.

Trump is a real estate developer, so it’s not surprising that his brief acceptance speech was dominated by the idea of “rebuilding,” a word he mentioned four times. . .Trump’s pledge to make America’s infrastructure “second to none” is the correct and bold goal for America’s competitiveness, future job creation, and well-being. America today is certainly no longer “second to none.” On a recent Sustainable Development Goals Index, the United States ranked 22nd out of 34 high-income countries. For Americans returning from foreign travel, the well-known sign that they’ve touched down in America is that the elevators, escalators, and moving walkways of our once-proud airports are out of order. . .

The key to success in rebuilding America can be summarized in three words: smart, fair, and sustainable. . . Sustainable infrastructure means acknowledging and anticipating the dire environmental threats facing America’s cities and infrastructure. The collapse of the New Orleans levees had been long predicted by scientists and engineers before Hurricane Katrina. The flooding of New York City had been long predicted before Hurricane Sandy. The risks ahead to the United States in the event of unchecked climate change can be found in countless scientific and policy studies, such as the Risky Business Project and the National Climate Assessment.

6.  The private sector could save the sustainability agenda

Since President Obama took office in 2009, the private sector has helped take responsibility for advancing the nation’s sustainability agenda.

As many businesses have discovered, decoupling economic progress from resource use and environmental decline can also be one of the biggest drivers of future success. In other words, money flows where sustainability grows. . .

Continued attention by companies to these environmental costs is helping to keep some of the barriers to a more sustainable future in check. For example, 2016 marks the second-consecutive year in which the rise of climate warming greenhouse gas emissions has been decoupled from economic growth. Sustained progress along similar lines will help to ensure that President Obama’s vision for sustainability stands a chance of enduring despite the relaxed regulatory environment expected under a President Trump.

Mark Stafford Smith writes:
A consistent narrative about the recent political trends in ‘western countries’ as well as the Middle East is that increasing inequality has driven the marginalisation and frustration of a swathe of people, with the concentration of wealth insulating the rich from (at least the first order) implications of their behaviour. This seems true within de-industrialising developed nations, as well as within globally-connected developing regions, and among countries globally. As we seek to focus research on solutions rather than just a further definition of the problems arising from global change, sustainability researchers (indeed many others, like engineers, technologists, and health researchers, but perhaps especially sustainability researchers) need to commit to ALWAYS considering the distributional effects of solutions options that they may offer, at whatever scale of policy or technology. (i) Ideally options will emphasise greater equity.  Even then there will often be winners and losers from solutions, and (ii) exploring how to compensate losers from the start rather than as an afterthought should also be de rigour. There will usually be issues of power and agency that natural scientists and engineers find it hard to engage with; however, sustainability researchers should make it their business to at least (iii) be aware of the power structure contexts in which solutions are being offered and preferably to (iv) act to facilitate a balanced engagement with the solutions across society, whatever that may mean in different contexts. Not everyone needs to do these things, but all of us should respect the need for many of us to try.

Mark McCaffrey writes:
All good points, but we also need to loose the “information deficit theory” that basically says having an informed public isn’t important.  It is, and research in Nature Climate Change and elsewhere makes it clear that in particular education– good solid climate literacy– is vital for informing climate action.  The original UNFCCC called for nations to take responsibility for providing education, training, public access to information and opportunities to develop adequate responses to climate change. Article 12 of the Paris Agreement calls for capacity building through effective education, communications and outreach, but it is an orphan in planning to follow-through on the agreement.  Meanwhile, only 63 of the 196 that are party to the UNFCCC had any mention of education in their Nationally Determined Contributions.  A new community for helping share effective practices in long-term literacy-building, ongoing communication and more immediate messaging to inspire and inform has been launched at COP22. Called ECONGO, it aims to develop an international network to maximize our collective impact, which ultimately needs to happen at the local level– in our schools and communities.

Dawn Wright writes:
As one who works for a smart mapping company, I feel compelled to jump in on the technological innovation discussion. We are currently in an International Year of Global Understanding and a National Geography Awareness Week, both focused on the power of map technology in the hands of both young and old, rich and poor, and part of the engine of sustainable development design and practice. Mapping technology is increasingly seeking to bridge the “digital divide,” particularly among the youth, the so-called digital natives, armed only with mobile phones. And the maps that are on these mobile phones and other small devices are changing what we measure, how we analyze, what predictions we make, how we plan, how we design, how we evaluate and ultimately how we manage it all—doing it all with such ease that school children can participate, but with underlying rigor and sophisticated cartographic functionality behind the scenes.

If it is true that we will love and protect only what we understand, one game plan is to continue to use the mapping technologies that we already have to continue to help us toward sustainability. In our lifetime we’ve seen one mapping technology completely transform us as human beings; the Global Positioning System made it so that we’re rarely lost. If allied mapping technologies such as GIS became as ubiquitous, organizations, communities and societies will better understand what actions need to be taken to improve or save our environment. So the game plan here is to keep going! “Keep calm and map on!”