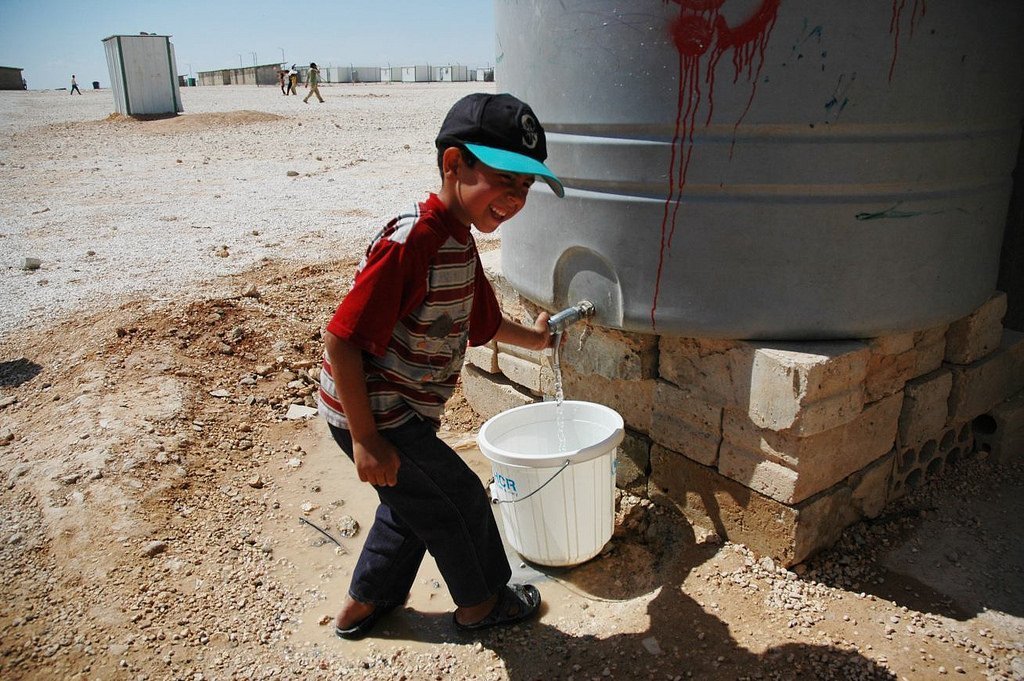 The Syrian civil war and refugee crisis have profoundly reshaped agriculture and water resources in the Yarmouk River basin of southern Syria.
By Sarah DeWeerdt
December 13, 2016

The Syrian civil war and refugee crisis have profoundly reshaped agriculture and water resources in the Yarmouk River basin, according to an analysis published last week in the Proceedings of the National Academy of Sciences.

The Yarmouk is the largest tributary of the Jordan River and forms part of the boundary between Syria and Jordan. Researchers had observed that inflows of water to the Al-Wehda Reservoir, where the Yarmouk River enters Jordanian territory, increased at the same time as the refugee crisis was unfolding. But the cause and effect relationships were unknown.

It was a tricky question to answer because collecting on-the-ground data in a war zone is, to put it mildly, very difficult. In the new study, researchers used satellite data to estimate rainfall, the area of irrigated crops, and reservoir volumes between 2000 and 2015.

Irrigated croplands increased in both the Syrian and the Jordanian portions of the Yarmouk basin from 2000 to 2006, then declined sharply due to a region-wide drought, the researchers found. Agriculture rebounded when the rains returned in 2009, and declined again with the onset of another dry spell in 2013.

2013 was also the year when most refugees left Syria. The civil war had begun in mid-2011, sparked in part by riots over water scarcity and poor crop yields in the city of Dara’a, which lies within the Yarmouk basin.

The Jordanian portion of the Yarmouk basin has been little affected by refugee flows; many Syrians fled to Jordan, but most of these refugees went to cities or to camps in other parts of the country.

This differential history is reflected in the satellite imagery. “Notably, the post-2012 drop [in irrigated area] was much greater in Syria than in Jordan, suggesting that conflict and the flight of refugees caused a major reduction in farming and associated reduction in irrigation water use in Syria,” the researchers write.

Changes in the water levels of reservoirs, which hold back winter rains to prevent flooding and store the water for irrigation the following summer, tell a similar story.

Reservoirs in both Syria and the Israeli-controlled Golan Heights—a nearby region with similar climate and agricultural practices that has not been affected by refugee flows—were nearly empty through much of the 2006-2008 drought. They stored more water during the drought recovery, and show declining water levels since 2013. But again, the latest decrease in water storage has been much more pronounced in Syria.

In other words, as refugees leave the area and abandon their agricultural fields, there is no longer any need to retain winter rains in reservoirs for summer irrigation. There is also some evidence that the rebel forces that have been in control of southern Syria lack the technical expertise to operate the Yarmouk dams.

In turn, these changes have produced an approximately 150% increase in the amount of water flowing into the Al-Wehda Reservoir on the Jordanian border. (Inflow to the reservoir has increased nearly 3.5-fold altogether, but some of this is due to drought recovery.)

Even so, the increase in Yarmouk River flows reaching Jordan doesn’t do much to alleviate the refugees’ strain on Jordan’s scarce water supplies, because the water isn’t where the refugees are. And water flows into Jordan remain substantially lower than expected under bilateral agreements between Syria and Jordan, emphasizing that this remains a very water-stressed region of the world.

More broadly, the study shows that the end of an environmental crisis doesn’t always mean the smooth resolution of its human effects. After the drought of the mid-2000s ended, agriculture in Jordan recovered; Syria descended into chaos. And environmental conditions aren’t just the backdrop to human events—they remain both bound up with and embedded in our own history, with the two often changing each other in unexpected ways.

Source: Muller MF et al. “Impact of the Syrian refugee crisis on land use and transboundary freshwater resources.” Proceedings of the National Academy of Sciences. 2016.