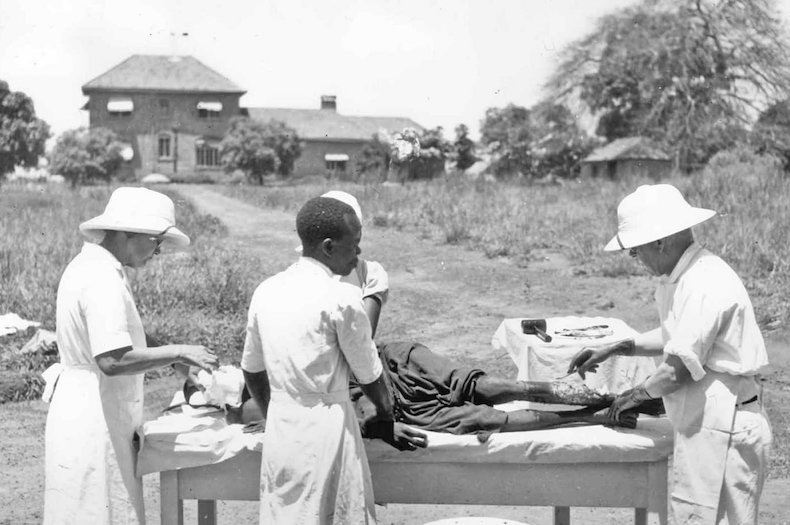 When nature gets sick, so do we
New work in French Guiana links degraded freshwater habitat to the spread of disease-causing organisms.
By Brandon Keim
December 14, 2016

That human health and Earth’s health are intertwined can sound like a truism—more of a bumper sticker or poetic truth than scientific fact. Yet a growing body of research suggests that disrupted ecologies may indeed produce more disease.

The latest such study comes from French Guiana, where researchers led by ecologist Aaron Morris of Imperial College London wanted to understand the origins of Bruli’s ulcer, a debilitating skin disease caused by the bacteria Myobacteria ulcerans. The first cases of Bruli’s ulcer were documented in the late 1940s; since then incidence has risen, with 2,200 cases reported in 2014, but the disease’s precise origins and reasons for its spread have remained mysterious.

Scientists did know, though, that Bruli’s ulcer is most common in people who live near or work around fresh water, and several insect species are implicated in its transmission. So Morris’s team took bacterial samples from more than 3,600 freshwater organisms at sites across the country, measuring their load of M. ulcerans and noting the environmental conditions in which they were found.

A clear pattern emerged. The bacteria was most abundant in small, bottom-of-the food chain insects and fish. These creatures were in turn most abundant in environments where habitat destruction and human development had reduced populations of predators, allowing prey populations to swell unchecked. “The freshwater food-web collapse,” they write, “leads to an increase of the pathogen”—and, logically, an increase in human infections.

Morris cautioned against interpreting the findings, which were published in the journal Science Advances, too broadly. They described just one disease, after all, in one specific setting. But they underscore “how anthropogenic pressure has profound effects on the makeup of biological communities, and infectious or potentially infectious diseases are part of this,” said Morris. And the findings fit with observations made elsewhere with other emerging diseases.

The Hendra virus in Australia, for example, spilled over from fruit bats whose migration patterns were altered by habitat destruction and the planting of non-native fruit trees that concentrated their populations in disease-spreading clusters. Lyme disease, which is carried by deer- and rodent-borne ticks, is most prevalent in shrubby, predator-impoverished suburban woodlands in the eastern United States. The details and dynamics vary for these diseases, but the bigger picture is consistent: an intertwining of human activity, ecological disruption and pathogen spread.

Discover more:  An ingenious off-grid water purifier inspired by pufferfish runs on nothing but sunlight

Even if this applied only to freshwater ecosystems, though, the pattern would still be troubling. Riparian habitats are threatened all over the world; Morris and colleagues note that between 10,000 and 20,000 freshwater species are threatened with extinction. And those bottom-of-the-food-web organisms which proliferate in the absence of predators “could form a hotspot for many bacterial or viral pathogens,” they write, because their life histories—short-lived and fast-reproducing, with relatively little energy devoted to their immune systems—make them ideal hosts.

“It is not unreasonable to predict that the emergence and reemergence of infectious diseases will become more common,” write the researchers. Which raises a question: if human activity is unavoidable but disturbed ecologies are dangerous, why not eliminate them altogether? Why not pave, drain and poison until there’s nothing alive left to spread disease?

That, says Morris, is unlikely to work. People need functioning ecologies. Aside from that, any efforts to completely decontaminate them would likely lead to further disruptions and potential spreads of disease. After all, diseases like malaria are spread by mosquito species that have adapted to flourish in the most disrupted, urbanized environments possible.

Rather than trying to eliminate ecologies, we should try to understand and protect them, and to understand that their health is of pressing concern to our own.